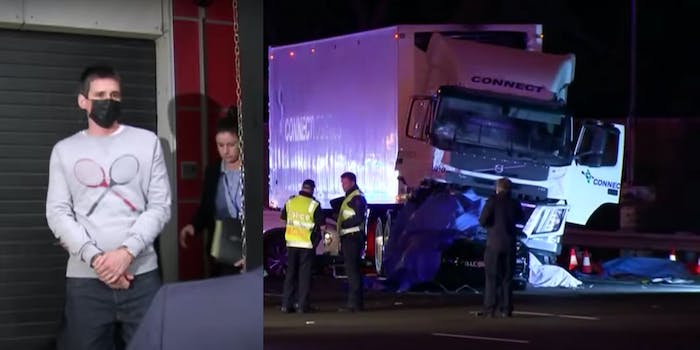 Richard Pusey reportedly then shared the video with several of his friends.

According to Insider, Pusey, 42, a mortgage broker from Melbourne, was driving his Porsche on a highway when the officers pulled him over for speeding. As the officers made his arrest, all four were struck by a passing lorry that veered out of its lane.

The officers—Lynette Taylor, Kevin King, Glen Humphris, and Josh Prestney—all died, BBC reports. Pusey was standing away from the officers at the time of the crash.

The charge of outraging public decency related to Pusey’s actions post-crash, which included filming and making comments about what had just happened.

“Amazing. Absolutely amazing,” he said before fleeing the scene. “All I wanted to do was go home and eat my sushi, and now you have fucked my fucking car.”

Experts told BBC that Taylor, one of the officers, was likely still alive while Pusey was filming. The police later found that Pusey shared the video with several of his friends.

Pusey pleaded guilty to outraging public decency, as well as drug possession and the speeding offenses. He is due again in court on March 31, according to BBC. The lorry driver, meanwhile, pleaded guilty to four charges of culpable driving causing death.