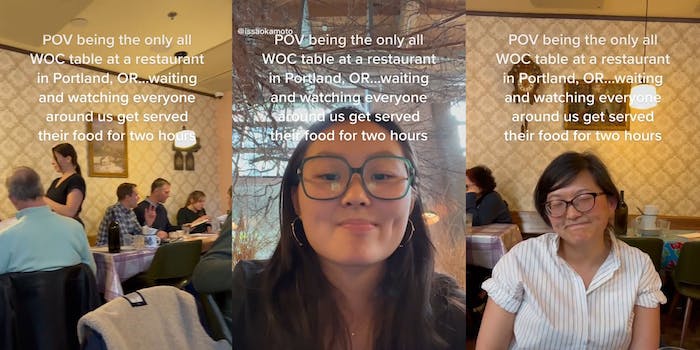 ‘Leave a review’: Two women of color went out to eat in Portland and allege they weren’t served for hours while white patrons were

'Please tell us the name so we can avoid it.'

Eating out in a crowded restaurant is a bit of a double-edged sword. On the one hand, if the place is packed to the rafters, then it’s probably a great spot to eat. When your food finally does arrive, then you’re more than likely going to chow down on a dish that’s worth the wait.

However, when you look around and notice that there are a bunch of other tables around you, and some with people who were seated well after you, who are receiving service while you’re ignored, you may ask yourself if there’s a reason why.

Issa (@issaokamoto) noticed a striking similarity between all of the tables that received better service as opposed to the table she was seated at. She took to TikTok to share a video of the restaurant, along with her and her mother’s reaction to what transpired.

They gave us a lil dish of pickled turnips to snack on though!

In the clip, the two quietly show their displeasure at how they’re being at the restaurant.

The rest of the tables are predominantly occupied by white men, who are all being waited on. From the looks of their video, they’re the only women of color in the restaurant.

The text overlay on the video reads, “POV being the only all WOC table at a restaurant in Portland, OR…waiting and watching everyone around us get served their food for two hours.”

The last sentence really struck a nerve with commenters. Issa claims that for two hours while other folks in the restaurant were receiving their dishes, she and her mother were only given “a lil dish of pickled turnips to snack on.”

Some TikTokers mentioned that this is par the course for their own restaurant visits in Portland: “I’m glad but not glad to see this because it happened to me so much in Portland I wasn’t sure if I was like making it up in my head being ignored,” one commenter wrote.

“Similar situation happened to us couple years back at Blossoming Lotus in Portland. We were the only POC lol,” alleged another.

Others highlighted Issa’s experience as a case of racism in a city known for “wokeness.”

“i thought Portland is some anti racist haven LMAO.”

“Me in Austin they love to pretend they’re woke.”

Others couldn’t believe that the pair even waited at the restaurant for that long in the first place, with one commenter stating that they would’ve piped up after 15 minutes of waiting without service. Some said that they didn’t believe Issa’s post as they couldn’t comprehend sitting down at a restaurant for so long and not receiving any service.

In the comments section, several TikTokers wanted to know the name of the restaurant, and Issa obliged. She identified the restaurant as Kachka, a restaurant that specializes in Russian and Eastern European cuisine in Portland.

The establishment’s Yelp and Google pages showcase high-scoring reviews for Kachka, but there has been a recent slew of 1-star reviews popping up where folks have apparently referenced Issa’s story.

“Waiting two hours for people of color. Other tables got their food. Do not go to this restaurant. Racist,” Tracy B. wrote.

“Food and service is mediocre at best…So many other nicer establishments in the area.”

Other reviewers had exceedingly positive things to say about the restaurant, like Keizzel C. who said that the “service was wonderful” on Yelp.

The Daily Dot has reached out to Kachka via email and Issa on TikTok for comment on this story.