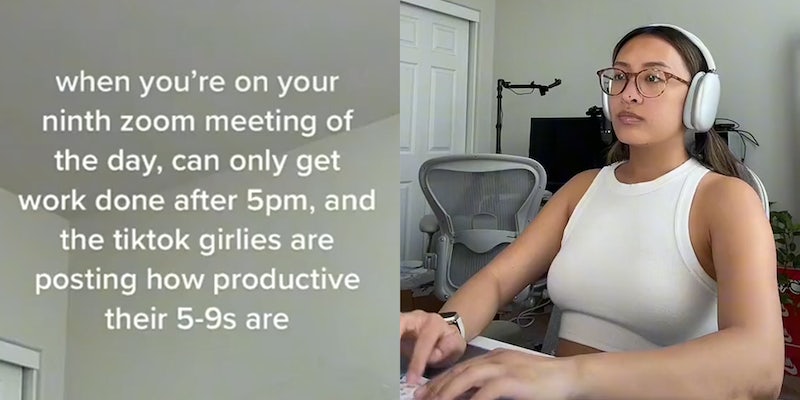 ‘WFH just feels like a never-ending work day’: Remote worker says she has so many Zoom meetings that she does her work after 5pm

Remote workers are resonating with a TikToker’s claim that her workday extends beyond 5pm because she is stuck in Zoom meetings all day.

In the video, @mightbekat says her workday continues past 5pm, comparing that to other workers whose days have a hard stop at that time, allowing them to have a full 5-9pm routine that does not revolve around work.

“When you’re on your ninth Zoom meeting of the day, can only get work done after 5 p.m., and the TikTok girlies are posting about how productive their 5-9s are,” a text overlay on the video, which was viewed over 150,000 times, reads.

One commenter posited that it is the TikToker’s manager’s responsibility, not her own, to make sure she is able to get all of her work done from 9am-5pm.

“If your management can’t manage your schedule (or) workload so you get off work at a normal hour… the work not getting done isn’t your problem,” one commenter wrote.

Others shared their own frustrations with meetings eating up their workday.

“Anyone saying ‘block off your calendar’ has never been client facing,” one commenter wrote.

“Zoom meetings kill productivity,” another commenter wrote. “For me at least. Back to back? I’m getting nothing done that day.”

Timely cited a TechRepublic study that found remote workers are overworking, with workers in the U.S. working an average of three additional hours per day.

“Yeah wfh just feels like a never ending work day,” one said. “But hey I got in a load of laundry.”

Others criticized the 5-9pm trend for setting unrealistic expectations.

“I hate the 5-9 mentality!” one commenter wrote. “Girl I already work after work, when am I supposed to sleep? There is no time for another job.”

“It’s for real exhausting it’s almost like they post it to validate themselves,” another commenter wrote. “Don’t listen queen.”

According to Refinery 29, for the 9-5 trend, TikTokers typically post the routines they have after their workdays. This could include doing yoga, cooking a healthy meal, and cleaning their living spaces. The trend has been criticized for playing into patriarchal and capitalistic ideals as most of those who partake are women with full-time jobs.

“The ‘5-to-9 routine’ is primarily built around productivity, maximizing your potential as both a worker and a consumer under capitalism,” TikToker @c.a.i.t.l.y.n says in a viral video criticizing the trend. “[Think] about the ways that we use our time, even outside of the workplace, to serve the purposes of the workplace [and to prepare] ourselves to be better performers when we are at work.”

The Daily Dot has reached out to @mightbekat via TikTok comment.