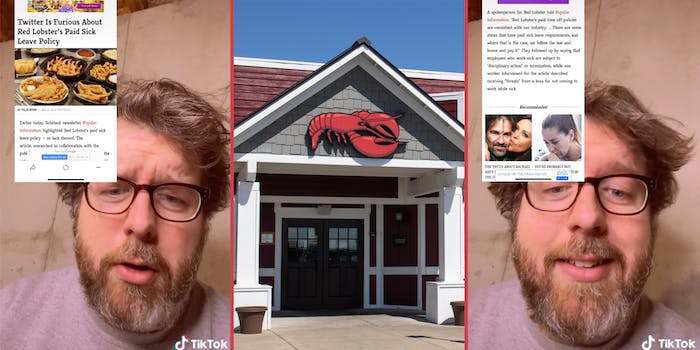 "If these companies could pay you literal shit, they (would)."

A TikToker put Red Lobster on blast in a now-viral video discussing the restaurant’s sick leave policy for employees.

Ben (@benwithabee) posted the TikTok in response to a Mashed article discussing the policy—or lack thereof. Ben has almost 21,000 followers on the platform and is known for discussing employee rights and fair business practices.

“If anybody’s ever worked in the food or retail industry, they would know that paid sick leave is like this mystical, mythical creature that hasn’t been seen for thousands of years,” Ben said in the video.

The TikToker pointed out that many part-time employees don’t get sick leave or vacation time, even if it’s unpaid. He said many restaurants are staffed “just enough to operate,” leaving no wiggle room for employees to take time off.

“If you have one or two people out sick, they’re fucked,” Ben said of the restaurants.

Those one or two people out sick are likely unpaid during their time off. Red Lobster only grants workers paid sick leave in some locations, like in states where it is legally required to do so, according to an article from Popular Information, which Mashed referenced.

A Red Lobster spokesperson said in a statement to Popular Information that the company’s paid-time-off policies “are consistent with our industry.”

“There are some states that have paid sick leave requirements, and where that is the case, we follow the law and honor and pay it,” the statement read. “We take health and safety very seriously and have an Ill Employee Health Policy in place that is designed to keep both employees and our guests safe. No one is allowed to work sick. Employees who violate this policy are subject to disciplinary action, including termination of employment.”

In his TikTok, Ben said, “I fucking love shit like this” about the statement from Red Lobster.

“It’s consistent in our industry to treat you like shit, so we’re going to,” Ben said, mocking the company. “If these companies could pay you literal shit, they [would].”

Ben’s TikTok, which he captioned, “Please don’t force sick people to make my food,” received about 46,000 views and 320 comments by Thursday. The majority of viewers agreed with Ben that good paid-time-off policies are virtually nonexistent in the food and retail industry—and not just at Red Lobster.

“If these companies could keep you in a barn and pay you with hay they would,” one viewer commented on the TikTok.

Another viewer wrote, “Ohh [absolutely] if a company can get away with it legally they’ll do it.”

“The restaurant industry is maybe the most exploitative industry in America and that’s an incredibly shameful distinction,” one user said.

In response to the comment, Ben wrote, “It truly is. They push the cost of ruining their business off on their employees and the customers in a very aggressive way.”

One viewer didn’t find the criticism helpful, though. They commented, “Instead of making shitty TikTok’s where you just bash pretty much most business why don’t you don’t you change the world for us.”

“I think the best place to start Is by having a conversation!” Ben replied to the comment. “I don’t like seeing people being taken advantage of. Sorry you were offended by this!”

TikTok user @benwithabee did not respond to the Daily Dot’s request for comment via TikTok comment. The Daily Dot also reached out to Red Lobster.