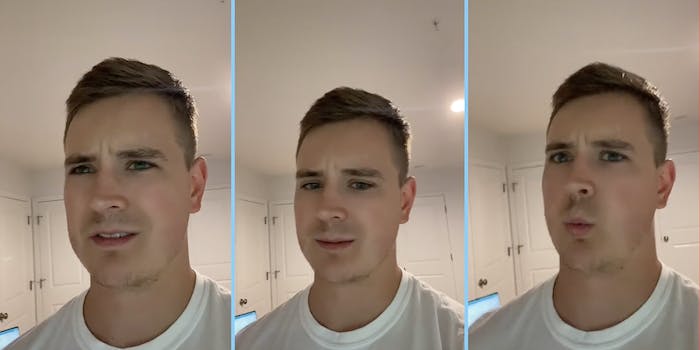 ‘Get a better budget or get a cheaper person’: Worker calls out recruiters who first reach out to him but won’t negotiate pay

In a viral TikTok video, a worker shares his gripes with job recruiters who reach out to him—but aren’t willing to negotiate beyond their “lowball” salary offers.

User @pbsquamer discusses one of many interactions he’s had with job recruiters who “slid into his DMs” in the hopes of getting him out of his current engineering job and placed with a new company.

His video received over 171,000 views as of Sunday and sparked discussion about salary negotiation.

“But but but our budget, k, get a better budget or get a cheaper person,” he captioned the TikTok.

@pbsquamer But but but our budget, k, get a better budget or get a cheaper person #fyp #recruiter #engineer #why #stop ♬ original sound – Pbsquamer

“Well, it happened to me again,” the creator says. “Another job recruiter slid into my DMs, scheduled an interview, and when I finally told them the parameters of what I wanted, you know, salary and everything like that, he was like, ‘that’s way too high.'”

The response confused @pbsquamer, who pointed out to the recruiter that they were the one who approached him for a job, not the other way around.

“And I was like, ‘you slid into my DMs,'” he continues. “I get to pick things, I don’t know what you want from me. You want me, I don’t want you. I’m fine with my current company but I’ll hear offers. But if you’re not gonna like give me something to leave, why would I leave?”

As @pbsquamer says at the top of the video, this has happened to him before, and he’s noticed a few commonalities between the reactions that recruiters have, especially when they’ve been curved.

“And then after that, they always get kinda rude, and they try to gaslight you that you’re not worth what you’re asking for, which is really interesting to me. Because I’m like, I am already making what you’re offering me. You want me to leave, you have to offer more.”

The TikToker says situations like this happen at least once each month.

Viewers applauded @pbsquamer’s willingness to stand up for himself and his worth. Many also lambasted the recruiter’s lack of negotiating finesse and inability to comprehend why someone wouldn’t bend over backward to exit a workplace that they enjoy.

“A recruiter did this to me once and I said ‘You’re not very good at negotiating are you?'” one user wrote.

“Know your worth. If the budget won’t allow it; then they can’t afford you,” another seconded.

Others shared their own job recruiting gripes. One user noted the common interview experience of being put on the spot to sell yourself to whoever is hiring, when the opposite should be true by the very nature of them approaching you for the job.

“Just went through that. Group offered me a position and started trying to gaslight when I asked for a comparable PTO offering,” a second shared.

Several viewers offered tips on how to deal with recruiters and job postings in a more efficient way.

“Before you agree to a call, ask them what their salary budget for the role is,” one user suggested. “If they dont answer, dont do the call. Dont waste your time.”

“I don’t respond to requests if the salary isn’t in the first contact,” another said. “Everyone needs to start doing that to make life easier.”

“My husband had a recruiter text him and ask if he regretted not taking the job he found,” a third user shared. “Yes he totally regrets not taking that pay cut.”

According to CNBC, recruiters are being put through the ringer in the wake of the COVID-19 pandemic as employees are demanding higher pay and other perks. Recruiters have had to turn to aggressive tactics and generous offers to get new hires.

In addition, pay transparency has become a larger movement within the workforce. Some states and cities now require job listings to include salaries right off the bat. However, many major companies have also recently begun rescinding job offers to prospective employees en masse, Tesla included.