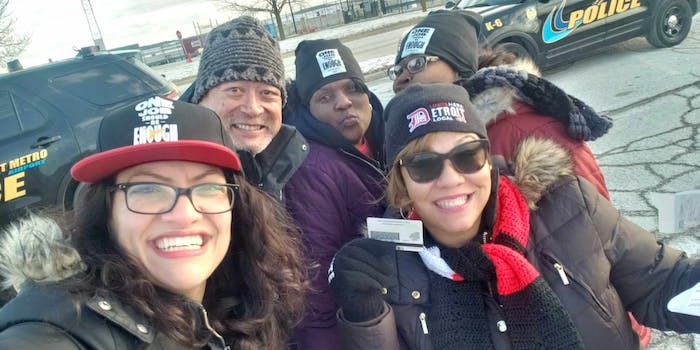 The congresswoman was briefly detained during the protests.

Rep. Rashida Tlaib (D-Mich.) joined a group of airline workers at the Detroit Metro Airport on Friday to protest working conditions in the industry.

At the protest, organized by labor rights organization UNITE HERE, the congresswoman and numerous others sat outside the Delta Air Lines terminal.

Diana Hussein, a spokesperson for UNITE HERE, stated in a tweet that the protest was intended to bring attention to the workers’ “unaffordable health care and poverty wages.”

Although initial reports claimed that Tlaib was arrested alongside her fellow protesters, it was later confirmed that the politician was briefly detained and released, according to an ABC affiliate in Detroit.

Hussein later noted that while Tlaib was not arrested, she “did participate in solidarity in the civil disobedience, including joining the protesters in the van as officers took them for processing.”

UNITE HERE provided the Daily Dot with a statement on behalf of Tlaib regarding the protest.

“These workers are suffering and living under unimaginable conditions all because Delta wants to make more profits on the backs of the poor,” the congresswoman said. “The airline catering workers are desperate for a better quality of life and put their bodies on the line in their fight against the exorbitant corporate greed by the airlines denying them of their right to a living wage and good healthcare.”

Tlaib called on Delta “to commit to ending poverty in the airline catering industry so one job is enough for all airline workers.”

The Daily Dot reached out to the Michigan State Police for comment on the arrests but did not receive a reply by press time.

A press release from UNITE HERE states that the protest was just one of 16 at airports across the country.