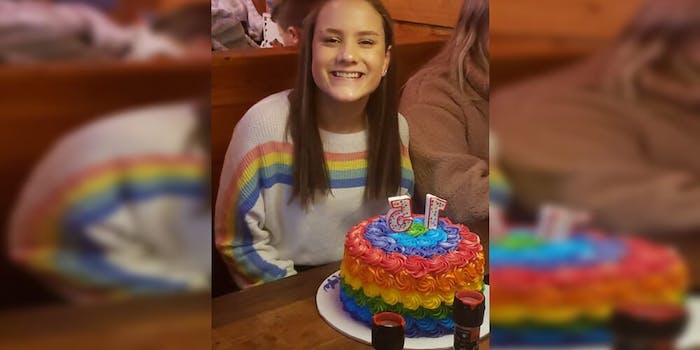 The mom says the cake was just cake, not a statement.

A Kentucky family is reeling after a picture of a birthday cake resulted in the expulsion of their teenage daughter from her private Christian high school in Louisville.

Kimberly Alford thought she had planned a lowkey birthday celebration for her daughter with just a few family and friends getting dinner at Texas Roadhouse. She brought a cake from a bakery to the restaurant, and by coincidence, the frosting matched her daughter’s shirt: Both featured a rainbow.

Alford’s daughter, Kayla Kenney, turned 15 on Dec. 30, and the mom shared the picture of her teen smiling with the cake on social media. The Washington Post reports that on Jan. 6, the head of Whitefield Academy, Bruce Jacobson, emailed the family to say that Kenney was expelled because of the picture with the rainbow birthday cake.

In the email, Jacobson claimed the image “demonstrates a posture of morality and cultural acceptance contrary to that of Whitefield Academy’s beliefs.”

A statement from the school claimed that Kenney had violated the student code of conduct several times before. Alford acknowledged in an interview with the Courier-Journal that her daughter could have been expelled with one more behavior issue but contended that Kenney had gone months without any problems. She also argued that rainbow frosting is not a behavior issue. “I’m not saying she’s this or that—she’s just Kayla to me. … I ordered the cake, she didn’t,” said Alford. She also asserts that she didn’t specifically order a rainbow cake; she requested colors that “pop,” and the receipt says “assorted colors.”

When she initially tried to appeal the expulsion, Jacobson told her that the birthday cake and sweater “just kind of represents gay pride” and said she should have refused the cake. Alford noted that until the expulsion, the Whitefield Academy Parent Teacher Fellowship had a rainbow prominently displayed on its private page.

There is likely no legal recourse for Kenney, as the Louisville Fairness Ordinance allows religious schools to expel anyone who violates its religious beliefs. “Who determines what’s Christ-like?” said Alford to the Post. “I just want her to be true to who she is.” Kenney has started attended a public school, and although Alford says it is at times overwhelming, it is also likely for the best.

“I just feel like those religious beliefs they are imposing now are very judgmental,” she explained to the Courier-Journal. “That’s not what I wanted for her.”