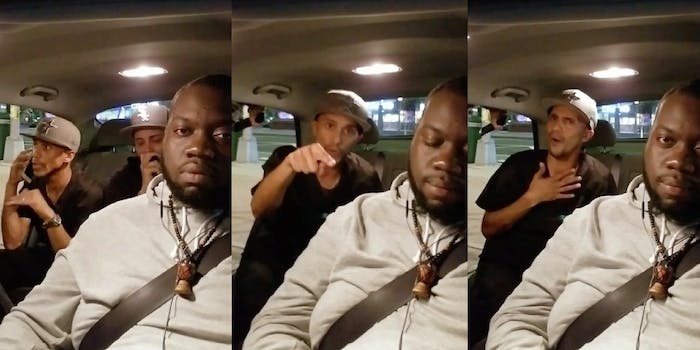 A man in New York City has been fired from his job after a viral video showed him calling the police on his Lyft driver, who is Black, because he didn’t allow the man to play music in the car. The passenger, who identified himself as gay and a Trump voter, also called the driver “racist against gay people” several times, decried the Black Lives Matter movement, and called the man the N-word and the F-word.

According to Instinct Magazine, the Lyft passenger, Robert Ortiz, had gotten into the car of Shawn Pepas Lettman, with two friends after leaving a gay club. Ortiz then asked Lettman if he could play music, to which Lettman denied. An argument resulted, at which point Lettman pulled the car over and stopped the ride, and Ortiz began calling the police. Lettman started filming the rest of the altercation and later uploaded the 16-minute-long video to YouTube on Oct. 5, where it’s garnered more than 130,000 views.

The video shows Ortiz calling Lettman “racist against gay people” several times to a Lyft customer support agent on the phone, saying that Lettman was discriminating against him because he wasn’t Black, and dismissing the Black Lives Matter movement. Ortiz also insists multiple times to the support agent that he’s not racist, and says he feels “racially profiled.”

Ortiz also says that he voted for President Donald Trump, and threatens to sue Lyft for charging him for the ride and Lettman for recording him without his “consent.” However, as the Root pointed out, New York’s one-party consent laws mean that someone can record another person without consent as long as there isn’t a “reasonable expectation of privacy.”

Lettman eventually stopped recording right as Ortiz began placing his cellphone in front of Lettman’s face. According to Lettman’s GoFundMe campaign, he also called 911 shortly after stopping the video because he feared what would happen if he didn’t get help. Thankfully, Ortiz didn’t get physical with Lettman, but his Lyft driver account was temporarily suspended, and he’s heard of a possible lawsuit for using the video he recorded of Ortiz. The campaign, which has raised nearly $25,000 for Lettman, will be supporting him, his wife, and their two children to catch up on rent and car payments.

Ortiz, however, was reportedly fired from his job at a CityMD emergency clinic, and bombarded with messages on his phone—he had recited his phone number twice on the video while speaking to 911 dispatch. The magazine reports Ortiz has already changed his phone number.

“The behavior exhibited in the video is deeply concerning,” the spokesperson said. “Lyft is committed to maintaining an inclusive and welcoming community and discriminatory behavior is unacceptable.”

Editor’s note: This piece has been updated to include comment from Lyft.