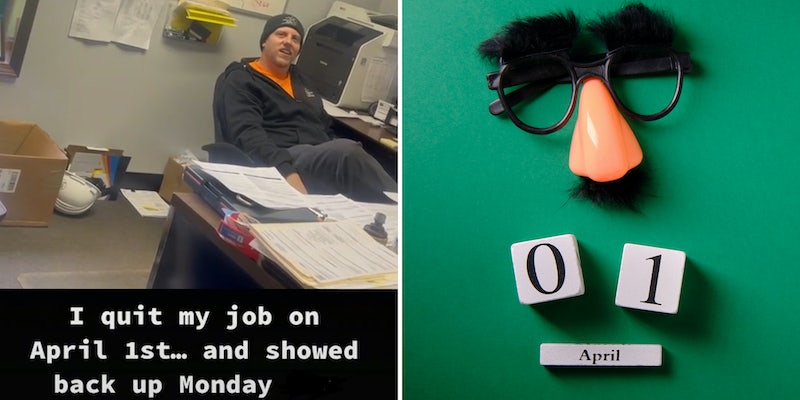 ‘He already filled out the paperwork’: Guy quits his job as a joke, tries to show back up to work

A man on TikTok quit his job on April Fool’s Day but failed to tell his boss it was a joke. When he showed up for work again, he didn’t have a job.

The man shared a recording of what happened when he tried to return to his job in a TikTok video. The man (@garrison9173) has about 2,700 followers on TikTok, and his video has been viewed 1.9 million times as of April 21.

In the video, the man’s boss is seen seated at a desk, and he says, “I thought you were done. I thought you quit.”

“It’s April Fools,” the TikToker replies. His boss waits a few seconds before saying “what” with a seemingly fake laugh.

The man reassures him “yeah” and the boss replies “no” with a slight shake of his head. The man reminds him that April Fools was the previous Friday. The day he came back for work was the following Monday.

There’s a long, awkward pause before the man’s boss shakes his head again and says “no.” Another awkward pause ensues, then the man says “alright,” seeming to realize that he wasn’t getting his job back.

The boss says something somewhat unintelligible, to which the poster replies, “No, I left. I told Ryan I’d be back in the morning on Tuesday, but then it was April Fool’s on Friday,” the man says.

The boss stares and blinks slowly, and there’s a short pause before the TikToker says, “But it’s cool. All’s good, brother.”

Several of the TikToker’s viewers said he ruined the “joke” by waiting too long to reveal that it was a joke. By Monday, his boss may have already filled out HR paperwork and removed him from payroll.

“He already filled out the paperwork,” one viewer commented on the video.

“Bro really thought he could wait 2 days to tell them that it was a joke. You’re supposed to tell them before he filled out the paperwork,” another viewer commented.

“He called HR and removed him from payroll and insurance,” one viewer said.

One TikToker shared their own April Fool’s day story, saying, “I quit on April first 6 years ago. And never went back. They really thought I was joking.”

Another TikToker shared their speculation of what really happened. They wrote, “nah this dude actually quit forreal and then regretted it and tried to get it back.”

The Daily Dot reached out to user @garrison9173 via TikTok comment.