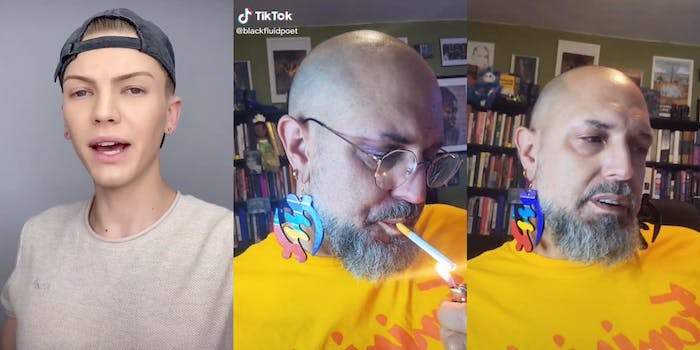 ‘You wouldn’t even be making a video if it wasn’t for them’: Queer elder schools young conservative TikToker on Pride Month

'Soon as he lit that cigarette I knew he was about to school his ass.'

John S. Blake, known as @blackfluidpoet with about 362,000 followers on TikTok, went viral for explaining the history and meaning behind Pride Month. As someone who says he was alive in the ’80s, he knows why queer people deserve an entire month recognizing them.

His video was stitched with another TikTok posted by @tobyduff, a conservative gay man who said he has never understood why Pride Month is “a thing.”

“Instead of Pride Month, we should have a day—if that,” Duff said. “I believe veterans and those that have served our country should have a month-long celebration.”

One user commented on Duff’s post, “Just because you believe it you don’t have to share it to the world.”

Blake began his response by lighting a cigarette, taking a deep puff, and laying out a stack of LGBTQ-related books. The stack included Sister Outsider by Audre Lorde; Unapologetic: A Black, Queer, and Feminist Mandate for Radical Movements by Charlene A. Carruthers; and Reclaiming Our Space: How Black Feminists Are Changing the World from the Tweets to the Street by Feminista Jones.

On Twitter, @latortuga78 said, “Soon as he lit that cigarette I knew he was about to school his ass.”

According to Blake, Duff doesn’t understand because he either doesn’t know history or chooses to ignore it. In the ’80s, people lost their jobs, families and homes for coming out as queer, Blake said.

“You wouldn’t even be making a video if it wasn’t for them,” he said.

“Oh the privilege not to care,” one user said.

The comment read, “The thing is.. He’s not a gay man. He’s transgender and in a deep denial. Pride is necessary and SHE knows it.”

Blake shook his head, saying, “We don’t do that here.”

Blake says that Duff’s self-identification as a man and his attraction to men classifies him as a gay man. He went on to say that he would fight “through bullets and blades” for Duff’s right to be a gay man and a conservative.

Whether or not he can acknowledge the queer activists and lives lost before him is irrelevant, Blake said.

“The one thing that I can acknowledge is how freely he got on social media and said ‘as a gay man,’” he said. “Do you know how long we’ve been waiting for that kind of freedom?”

Blake did not immediately respond to the Daily Dot’s request for comment.