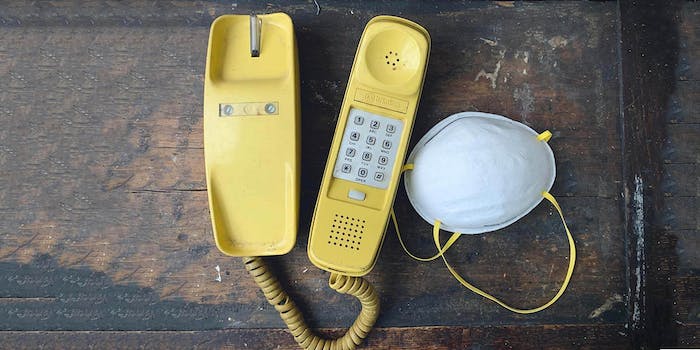 This app is connecting lonely people under coronavirus quarantine

QuarantineChat will let you 'talk on the phone with someone else stuck at home.'

During a trip to Shenzhen, China, in 2017, Danielle Baskin came down with mononucleosis, a virus that led her to stay home for several weeks upon returning to San Francisco.

Baskin, a voracious entrepreneur and artist who runs multiple businesses, spent a significant amount of time on the phone while avoiding human contact during those weeks.

Baskin had already been working on a voice-chat system at the time to keep in touch with her self-employed and freelance friends who similarly spent hours at home each day. Max Hawkins, a nomadic artist and computer scientist, spoke with Baskin regularly during her time under self-quarantine.

As is often the case when faced with any problem, Baskin began thinking of ways in which technology could be utilized to improve her situation. Speaking with the Daily Dot, Baskin says that’s when the idea for “Stereo,” a voice-chat app for people with mono, came about.

“I wish I could talk on the phone to other people with mono and ask them what movies they’re watching and other stuff,” Baskin recalled thinking. “It would be nice to talk to them because I know we’re going through a similar experience together at this moment.”

But Stereo never came to be, as other projects took precedent. A similar app did come to fruition in 2019, however, known as Dialup, a voice-based social network that connects friends over the phone at random times without revealing their actual phone numbers. Baskin says the app has traditionally been used “to connect conferences, organizations, remote teams, and particular interest group.”

But when the coronavirus (COVID-19) outbreak began, a light went off in Baskin’s head. What if people under coronavirus quarantine could speak to one another just like she had envisioned during her time with mono?

“I remember that feeling of isolation and how getting phone calls would completely change my mood,” Baskin said.

Talking to friends isn’t the same as the daily social interactions many experience with strangers while getting groceries or a cup of coffee, though. That’s when QuarantineChat was born.

Based on Baskin and Hawkins’ voice-chat app Dialup, QuarantineChat simulates “the serendipitous connections with strangers” you would otherwise be missing while stuck inside.

“We simulate the magic of having a surprise conversation with someone in public—something that is becoming increasingly rare during the times of a viral epidemic,” a description on the app’s website states.

Signing up is easy. Simply enter your phone number on the QuarantineChat website to receive a download link for Dialup. Once downloaded, users will automatically be enrolled in QuarantineChat. Conversations can be had entirely over WiFi or cellular data, meaning all calls are free.

When a random call does come in, users will see “QuarantineChat!” on their caller ID. Upon answering, users will be automatically taken to the Dialup app to connect with a fellow QuaratineChat participant.

“Whether the virus has affected you, or you’re worried, or you live in the woods—your phone might ring and connect you to another interesting person you should meet,” the QuarantineChat site adds. “COVID-19 is not a lighthearted matter, but we hope this project brings people moments of joy in an otherwise dark time.”

Baskin says several dozen people have signed up so far, with the majority of users appearing to come from Iranian timezones. Iran’s Deputy Health Minister Alireza Rais announced on Monday that the country has seen 1,501 infections and 66 deaths due to the virus. On Tuesday, statistics from John Hopkins University noted 2,336 infections and 77 deaths.

The Daily Dot downloaded the app and received a phone call on Monday evening announcing that a random individual would soon be on the other line.

“Welcome to QuarantineChat,” a voice says, set to elevator-style jazz music. “We’re about to connect you to another person somewhere in the world to discuss anything that’s on your mind. Please hold while we connect you.”

The first caller, a woman from Los Angeles, was not quarantined but had similarly signed up for the app in the hopes of speaking to an individual affected by the coronavirus.

Although the app is designed only to connect you to one individual per session for the time being, Baskin connected the Daily Dot to another caller as well.

The second caller, Shahzad, a 32-year-old Pakistani man living in the United Arab Emirates’ (UAE) city of Dubai, had not been infected by the coronavirus either but learned about the app while on Facebook.

The UAE has seen 21 confirmed cases of the coronavirus since the outbreak began. Shahzad described the situation in Dubai as relatively calm.

“Dubai is not bad actually,” Shahzad said. “They’re pretty active in controlling all these coughs that are going on and they’re pretty strict about it.”

A third call attempted to connect over the app but failed, possibly due to the other party’s poor internet connection.

Given that anyone can download the app, it remains uncertain if anyone who has signed up thus far is actually under quarantine or is merely curious about speaking to someone who is. Either way, given the app’s focus, such calls can offer a unique perspective into how other countries’ citizens perceive the outbreak.

Baskin says another random call will be made in the coming days, once again connecting those who have signed up for the service.

This is not the first idea Baskin has had in the wake of the coronavirus. The artist is also in the process of designing respirator masks that have the wearer’s face printed on them. This would allow users to unlock their phones with facial recognition while staying safe in a “dystopian” world filled with wildfires, air pollution, and viral outbreaks.