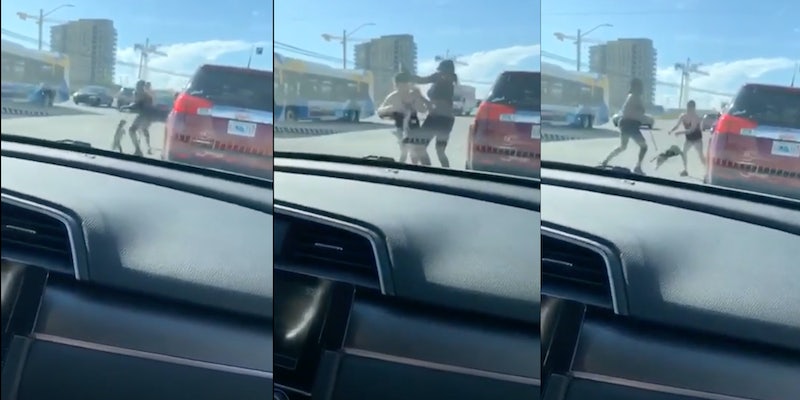 The woman takes the pet from its owner and beats the owner with her own pooch.

Police in Canada are investigating an animal cruelty incident after a woman was caught swinging a small dog on a leash as a weapon.

Dashcam video captured by a motorist in Dartmouth, Halifax, shows a female driver taking the pet from its owner. She then beats the owner with her own pooch. The incident occurred on July 1.

Police rushed to the scene after hearing reports of an altercation between four women.

At the time of the incident, no one involved wanted to pursue charges, police say. Police were told a dog was involved in the incident but said “the severity of the actions against the dog were not known at the time.”

Witness video, filmed by a motorist waiting behind, shows a woman pulling a dog out of its owner’s vehicle by its leash. When the driver of the car gets out and pursues her, the woman whips the dog at the driver’s head. The two struggle for a few seconds before the driver eventually gets the dog back.

Another video circulating on social media shows the minute the argument began. The two cars are stopped right against each other, a verbal altercation ensues before the two begin exchanging blows.

After learning of the now-viral videos, police launched an investigation into the apparent mistreatment of the dog. Police say the investigation is in the early stages.

Both dogs in one of the vehicles are “in good health,” according to police.