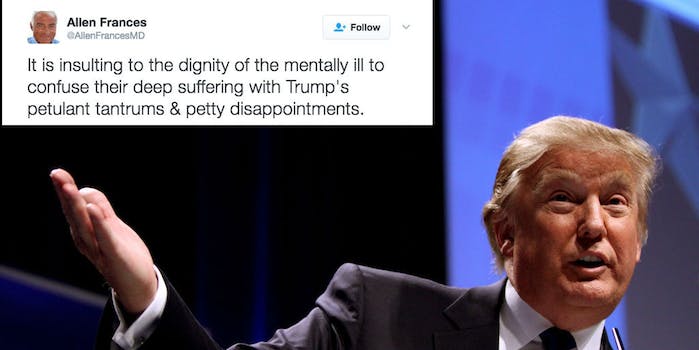 Trump is not mentally ill, says doctor who literally wrote the book on mental illness

'Mr. Trump causes severe distress rather than experiencing it.'

While you were sidelined by fast-food deals and other romantic endeavors on Tuesday, the man who literally wrote the criteria for mental disorders penned an op-ed in the New York Times denouncing all claims that President Donald Trump is mentally ill.

Dr. Allen Frances, chairman of the task force that wrote the DSM-IV and professor emeritus of psychiatry and behavioral sciences at Duke University Medical College, said that despite being diagnosed with narcissistic personality disorder by amateurs (and Twitter), Trump “does not suffer from the distress and impairment required to diagnose mental disorder”—though he is a “world-class narcissist,” Frances says.

Frances goes on to give the president a serious read: “Mr. Trump causes severe distress rather than experiencing it and has been richly rewarded, rather than punished, for his grandiosity, self-absorption, and lack of empathy. It is a stigmatizing insult to the mentally ill (who are mostly well behaved and well meaning) to be lumped with Mr. Trump (who is neither).”

It is insulting to the dignity of the mentally ill to confuse their deep suffering with Trump's petulant tantrums & petty disappointments. https://t.co/8nw8p3ghEC

As others have noted before, just because someone constantly exhibits “bad behavior,” it doesn’t mean they’re “crazy” or “certifiable.” It could just be a symptom of entitlement—the notion of grabbing what you want, never paying the consequences, and continuing the cycle of privilege.