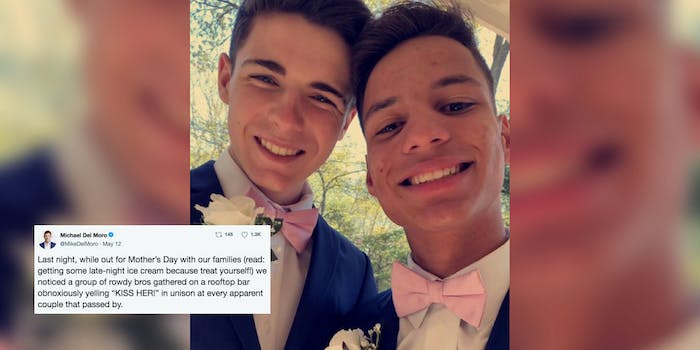 In this moment, love has won—and it's gone viral.

A gay prom couple in Seaside Heights, New Jersey, is being celebrated online after a stranger’s Twitter thread detailing their anxious run-in with a bachelor party has gone viral.

At that moment, Theodore Vidal, 17, and his boyfriend Colin Beyers, 18, were walking back from their first prom together, wearing matching navy tuxes and pink ties, and holding hands. Vidal told BuzzFeed News that when they heard the bachelor party, they tensed up, preparing for an insult.

“It’s South Jersey. Guys pick on us for being gay a lot,” Vidal told BuzzFeed News. “It’s an area where you normally would get picked on and discriminated against.”

Del Moro’s experience in Seaside Heights concurred. “Not so long ago,” he tweeted, “young men would shout the word ‘f****t’ out their car window as we’d stroll along the boardwalk.”

It’s prom season here, so at that time of night you’ll see high schoolers in their formal attire. As we walked by the rooftop bros, an adorable teenage gay couple passed us in perfectly fitting midnight bue tuxes, matching pink ties, holding hands.

However, while Del Moro feared for the worst as Vidal and Beyers walked by the group of men, the bachelor party quickly switched to shouting, “Kiss him!” After some slight hesitation, the couple kissed, and the rooftop crew and all other boardwalk spectators went “absolutely wild,” Del Moro tweeted.

A high school classmate of Vidal identified him from Del Moro’s thread and shared the couple’s Instagram posts from the night.

Omg… h/t to @JMiller_NJ for finding these two! Good for you being so brave and open Theodore and Colin! https://t.co/Moe0n87J6M https://t.co/oDtcsYSBXs pic.twitter.com/RidLuj3dUy

Del Moro later found out that he knew one of the men from the bachelor party, and was told that the group was very happy for the prom couple.

“I have entered situations before where I know I might get harassed or made fun of and it is a very uncomfortable feeling, so I am thrilled that they found happiness in this moment,” the bachelor at the center of the rowdy group told BuzzFeed News. “I wish them all the best in the future and encourage them to never stop being themselves and to ignore those that seek to not allow that.”

Of course, the fact that Vidal and Beyers were encouraged to pronounce their love in a public place with a history of homophobia doesn’t mean “everything’s fine now,” Del Moro tweeted. But it does mean that for this moment, love won.

This is not a “look everything’s fine now, thread,” and yes… it’s New Jersey, but I just thought it was worth sharing and an encouraging moment for young LGBTQ folks out there.

Vidal and Beyers called the show of public support a “small victory,” and stated they’ll never forget how the Jersey bachelor party made them feel.

“Machoism is such a thing here, so the fact that those guys cheered us on was shocking,” Beyers told BuzzFeed News. “It’s one of those small victories that makes the hard times worth it.”