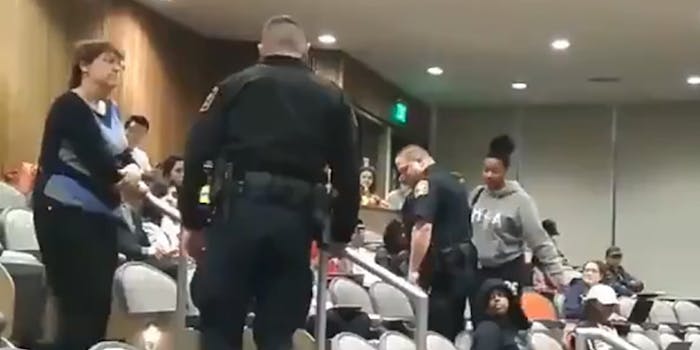 Professors are policing Black bodies in classrooms, too

Add this biology prof to the list of white women calling the cops on Black people for no good reason.

On Monday, a University of San Antonio professor called campus police on a Black student in her biology class. In a video that has since gone viral, you can see three campus officers guided by Professor Anita Morris escorting the female student out of the class. Other students watched in shock; some also recorded the incident. The crime? The student had her feet propped against the chair in front of her.

According to Apurva Rawal, who recorded the incident, the student who was removed hadn’t interrupted the professor, nor was she even talking in class. When questioned about why the police were called, Moss canceled the planned exam and rest of the class. Rawal said Moss had also given them lectures about civility before.

“As upset as I am that my professor decided to throw a temper tantrum the lecture before an exam and cancel class,” Rawal wrote in a tweet, “I’m even more outraged that she would decide to single out and humiliate a student just to flex her authority in a destructive manner.”

The class before this professor went on a whole tirade about how uncivil we all were because a few students were on their phone or not paying attention, cutting lecture time for the rest of us because her ego was bruised

On Twitter Monday afternoon, @FavoritePaigeee identified herself at the student escorted out of the class. “This is me in Anita Moss’ 2053 Bio classroom,” she tweeted. “Upon entering class I was told I needed to leave or would be escorted out by officers, I never disobeyed the student code of conduct. Not once. A police report is being filed atm, this is just the beginning. Thanks for your support!” (The Daily Dot has reached out @FavoritePaigee and Rawal but has not heard back as of this posting.)

This is me in Anita Moss’ 2053 Bio classroom. Upon entering class I was told I needed to leave or would be escorted out by officers, I never disobeyed the student code of conduct. Not once. A police report is being filed atm, this is just the beginning. Thanks for your support! https://t.co/YUZGmwgFa7

Many Twitter users and fellow students pointed out that the student escorted out of the class had not broken any rule in the UTSA Student Code of Conduct. However, there is leeway for interpretation: It is punishable to engage in behavior “that is intended to obstruct, disrupt, or interfere” any class. The Student Code of Conduct also notes that any university employee or representative “should not negotiate with those exhibiting disruptive behavior and instead take immediate action to utilize all lawful measures.”

Loosely interpreted by those wanting to exert power, these rules can result in cases like this, where (white) professors unjustly call the police on Black students in a country known for its violence against Black bodies. The video, which has over 2 million views, has become a part of an endless list of viral videos of white people calling the police on Black people for almost any reason, including: having public BBQs, wearing socks at swimming pools, and looking after two white children. In April, a video surfaced online of a Black college student in Georgia being beaten up by two police officers after being falsely accused of driving without a license place.

This recent incident at UTSA is no surprise to those aware of the state’s influx of racist and hate-filled sentiments on university campuses since the start of Trump’s presidency. Numerous incidents have occurred at nearby Texas State University, including fliers being distributed that encourage vigilante squads to torture those that advocate diversity, that urge students to report undocumented students, and that state white men should “take back the country your ancestors died for.” Earlier this month, banners exhibiting white nationalist sentiments were found on UTSA’s campus and then removed.

This kind of outward hostility toward Black people and people of color only emboldens others to do the same, both consciously and subconsciously. Campuses may be taking steps to combat racist rhetoric and bias, but many wonder, especially in light of Monday’s events, if it’s enough.

Martina McGhee, a doctoral candidate and teaching fellow at UTSA, remarked on Twitter how the recent work of administrators, like LT Robinson of the Campus Climate Team and Myron Anderson, the vice president for Inclusive Excellence, made her hopeful for university’s future treatment of Black students. She went on to say, though, “[We] still have a faculty problem here at #UTSA. I regularly hear about overt racism our Black students are subjected to by faculty.”

While I’m extremely excited about LT Robinson’s promotion and the hiring of Myron Anderson, we still have a faculty problem here at #UTSA I regularly hear about overt racism our black students are subjected to by faculty. https://t.co/wkoOyZ47V2

In a statement, UTSA acknowledged on Tuesday that it is concerned about the classroom incident and has met with both the student and Morris.

Later that day, the university updated with comment to say that Morris will be out for the rest of the semester and promised to do better about having safer campus reporting and hiring a more diverse staff. UTSA students, those white and of color, will be watching.