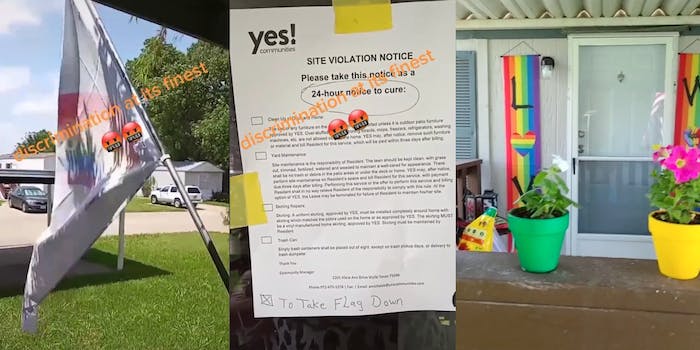 ‘Discrimination at its finest’: TikToker receives ‘site violation notice’ for hanging a Pride flag on her home

Viewers left comments of support and encouraged her to keep the flag up.

A TikToker posted a video showing a “site violation notice” from her housing community, Yes! Communities, asking her to take her Pride flag down from her home.

User Brandi Kress, or @brandikress, said that other people in her neighborhood have American flags hanging from their homes, and she found it frustrating that the community manager singled her “Proud as Fuck” flag out. Her video, posted on June 10, has garnered over 1.7 million views.

“They want to give us a fucking violation and tell us to take our fucking flag down,” she said in the video. “And wrote it in, it’s not even a goddamn rule.”

The violation had to be handwritten into the notice, asking Kress “to take flag down” in the next 24 hours.

“Yes! Communities, know that you will be getting sued for this one,” she ended the video.

Yes! Communities manages a number of “manufactured home” communities across the country. The neighborhoods include rented and owned homes.

In another video posted to her page, Kress showed her house decked out in new Pride decor, including a replacement non-explicit Pride flag and two banners that say “Love Wins.” “Lotta fight left in me,” she captioned the video, setting the music to “Fight Song” by Rachel Platten.

In a follow-up video, Kress posted a second notice, this time from her property management company Redwood at the Lake, which is a part of Yes! Communities, asking her again to take down her Pride flag. She had already changed her “Proud as Fuck” flag to one with no profanity, but the management company asked her to remove it because it wasn’t “approved.”

“The community proudly flies a United States flag, a Texas flag, and a Yes! Communities flag at the entrance to the community, which represents something all of our residents have in common,” the second letter read.

She interpreted the letter to mean that she cannot have the flag “because not everyone here is gay” and not everyone has that “in common.”

She also pointed at the section saying that she needed approval to hang her flag and claimed that none of her other neighbors have ever had to get approval for other flags they’ve hung.

Viewers left comments of support and encouraged Kress to keep the flag up.

“DO NOT TAKE IT DOWN,” one person wrote.

“Fight this!!!” another user expressed. “Texas is part of the USA. The USA stands for (or should stand for) FREEDOM FOR ALL. If we were neighbors I’d fly [my Pride flag] with you!”

Kress also said she has the support of her neighbors.

In her most recent update, Kress said that she has obtained a lawyer and has been advised not to speak further about the matter for the time being.

“We love your support,” she said in her video. “We just, right now, momentarily, cannot speak on the situation. Just know we are moving forward with the matter.”

The Daily Dot has reached out to Yes! Communities for comment.