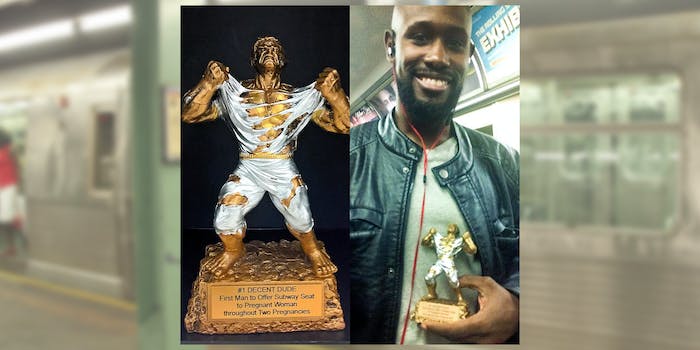 Things that suck about being pregnant: You feel nauseous at inopportune times; your equilibrium is off; you have a human sitting low on your bladder or high into your diaphragm, making it too easy to pee and too hard to breathe; you are carrying an extra 20 to 45 pounds in a single protruding area of your body. Crowded, claustrophobic commutes on public transportation are not your friend. Common sense and courtesy would have you believe that the least any human could do is give you their seat to take a load off.

Yvonne Lin proves this is not the case, however. The 38-year-old New York designer was in her eighth month of her second pregnancy before a man gave up his seat so she could sit down. Lin told DNA Info that women, especially blacks and Latinas, had given up their seats for her, but never a dude. (As a fellow New York subway rider and former pregnant person, I can confirm that this was also my experience—any time I was offered a seat, which was rare, it was usually by a woman of color. I would have to actually to stare men down, point at them, and gesture for them to get up.)

Lin had been waiting for this day so long that she’s been carrying a seven-inch trophy in her bag to give to the first man who’d show some kindness. Though she didn’t catch his name, she did get a photo of him with his gold Hulk-like statuette, which she posted on Instagram. The prize reads, “#1 DECENT DUDE. First man to offer subway seat to pregnant woman throughout Two Pregnancies.”

I'm about 8ish months preggers (again) and I look it. I've been gradually coming to the conclusion that men suck. I didn't get a single subway seat offered to me by a man throughout my first pregnancy. In contrast, women tend to be awesome and notice the people around them. So for the second pregnancy, I had this made and I've been carrying it around everyday – till last Friday. This guy is the winner! #subway #nyc #pregnant #socialexperiment

This is how the landmark moment went down: “He looked up at me and looked super startled and embarrassed,” Lin told DNA Info, “and he immediately stood up and said, ‘Please take this seat, I just noticed.'”

He also told Lin he was a father of two. “If men just gave up their seats the same amount of time or similar [as women], then it would be no problem,” Lin said.