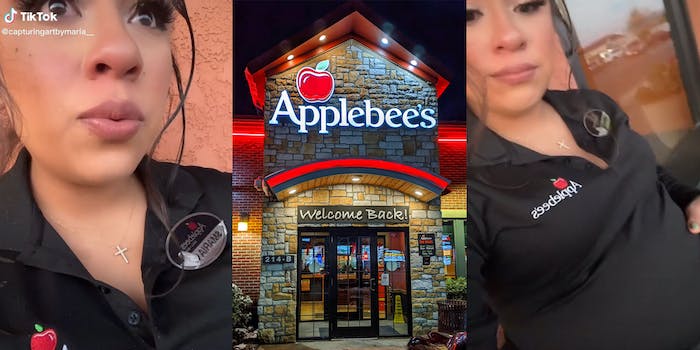 A pregnant Applebee’s employee was left in tears after her manager allegedly fat-shamed her, causing her to have a “cry fest” at work. User Maria Pantoja (@marrriaa_xo) posted a recap of the interaction on TikTok.

“When you are 36 weeks pregnant and your manager tells you, ‘What are you having, three kids?’” Pantoja says in the video through unshed tears. “When I proceed to tell him I’m gonna cry ’cause that’s rude he says, ‘When are you gonna pop, tomorrow?” Pantoja then pans the camera to show her 36-week old baby bump.

Pantoja clarified in one of the comments that she simply stood there in shock when it happened. “I felt like he had no right to say that!” she wrote. In another comment, she claims her co-worker came to the rescue, letting the manager know that the comment “wasn’t cool.” The manager allegedly “didn’t mean it like that,” but his words still stung.

“He said sorry my [ex-]wife never got that big she delivered early,” Pantoja said in another comment.  “Common sense tho don’t talk to a pregnant girl like that.”

The video was uploaded only a day ago on April 7 but has already gained viral status. Out of the 183,000-odd viewers, almost 600 of them left a comment under Pantoja’s video. The majority were viewers urging the creator to sue Applebee’s, or at the very least report the manager.

“Hell no I would go to HR immediately babe. I’m so sorry,”  another user wrote.

“Y’all hire anybody I see?” one of the tagged comments said.

“Please do something about this,” another comment mentioning the restaurant chain read.

“This is the kind of managers you have???? never eating here again,” a viewer wrote.

While it is unclear whether Pantoja took any of the advice hundreds of users left underneath her video, she did pin a comment a day later.

“Hey thank you everyone for your kind words, but I’m okay now,” she wrote in the comment. “It was definitely in the moment type of video and I was emotional.”

The Daily Dot reached out to Pantoja via Instagram direct message and Applebee’s via email for this story.