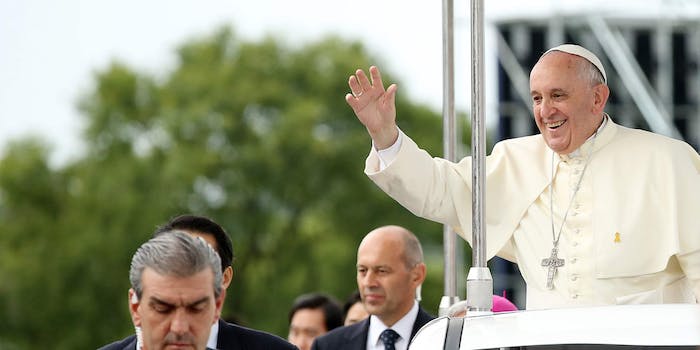 The pizzeria comes to him.

One pizzeria had a very special delivery for the head of the Catholic Church when he made a stop in Naples, Italy.

Pope Francis recently commented on the price of his fame and what he didn’t enjoy about being Pope, saying that he would love to “go out one day, without being recognized, and go to a pizzeria for a pizza.”

Enzo Cacialli, a co-owner of Pizzeria Don Ernesto, went ahead and made the pizza for him, topping it with “Il Papa” spelled out in dough, with yellow cherry tomatoes for the Vatican flag.

When Pope Francis drove through Naples in his motorcade, the employees at Pizzeria Don Ernesto were eagerly waiting to hand off their creation. No doubt the Pope would enjoy a slice at the end of a long day—presumably after his security team had tested every inch of it for poison and other harmful materials.

Photo via Republic of Korea/Flickr (CC BY SA 2.0)