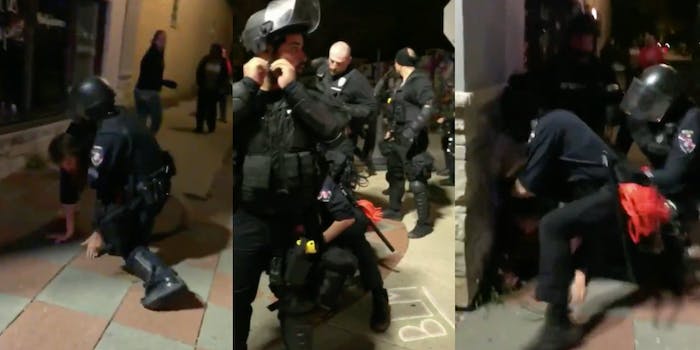 A video has surfaced showing police dogpile a man who an officer pushed to the ground following a nearby protest.

The video, posted on Reddit by user MMA1793 on Thursday, shows cop cars driving up to a cross street where the man is standing. One cop walks up to a crowd and says, “Go home or you’re getting arrested.”

According to the description of the video, the incident took place in Wauwatosa, Wisconsin on Oct. 9 and the victim is a veteran. The Daily Dot was not able to independently verify this information.

Protests broke out around that time following the news that an officer who fatally shot Alvin Cole in February would not be charged.

In the video, the man is standing with his hands folded and the officer grabs him by the arm and pulls him away. The officer pushes him to the ground while three other officers—all in riot gear—show up.

“What’d I do?” the man screams. “You guys are putting your knee in me, get your knee off me.” At this point, about eight officers are at the scene, surrounding him.

“Stop resisting or you’re going to get tased,” screams one officer. “You are arrested, stop resisting.”

“Lay down!” orders one officer.

“How can I when you have six people on me?”

This exchange is repeated a few times, with the cops asking him to “stop resisting” and the victim repeatedly saying he can’t move because there are six officers on him.

At this point in the video, the cops are seen asking the passersby to back away. One cop says the person recording is allowed to videotape but needs to back away.

The man is then seen taken away in handcuffs. The reason for his detention is not clear, though the cops are heard talking about curfews.

The Reddit user who posted the video declined to comment to a Daily Dot inquiry. Online, the number of officers showing up to arrest one person caught the eye of many.

“From the numbers able to show up in seconds in all of these videos, it looks like the US simply has far too many police. The job looks to have evolved from preventing crime to cowing the population,” wrote one user on Twitter. On Twitter, the video has received almost 40,000 views since being posted Friday.

“Police unions have to be held accountable for their officer’s brutality,” wrote another. “They pay the legal fees, the judgements, and any benefits after an officer is fired. Police unions are like the Mafia.”

“Why do so many cops have to rush to one guy?” someone commented on an Instagram video. “Is their training THAT BAD that it takes a whole football team worth of cops to get one guy down …pretty pathetic.”

But some others pointed out that there were others who were clearly allowed to stay and record, so a curfew wasn’t likely the only reason for the police force.

“So the veteran obviously has a court ordered curfew for a crime he committed, since there are other people out and the police aren’t bothering them. Am I missing something?” wrote one user on Instagram.

According to a man who uploaded the video to Instagram, the man arrested was not protesting but lived in the area and went outside to check on the noise.