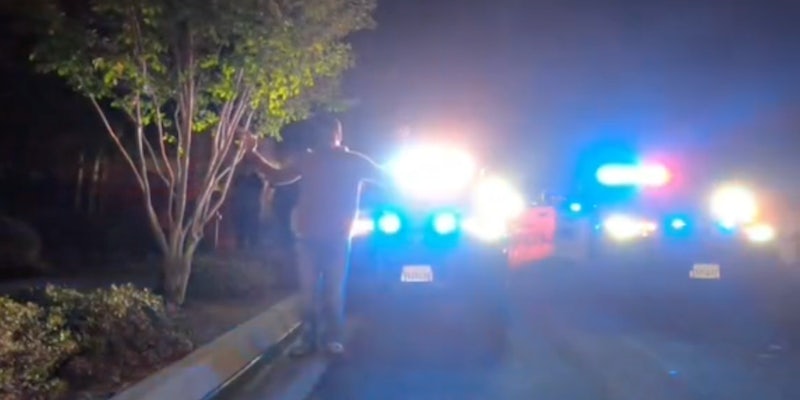 ‘What the f*ck did I do?’: TikToker and boyfriend surrounded by 8 cop cars, helicopter after police mistook their GoPro for gun

'This is my first time getting pulled over.'

What one TikToker believed was a routine traffic stop quickly went awry after eight cop cars and a helicopter surrounded her car after believing her boyfriend’s GoPro was a gun.

Myabeatrize, or @myabeatrize, and her boyfriend were driving at night when the cops pulled them over and told her to throw the keys out of the car. The original video, which has over 11.5 million views and 1.7 million likes since posting Tuesday, shows her smiling because she’s excited about her first traffic stop. Cops then ask her to put her hands outside her window. It’s unclear where this incident took place or which police department was involved.

“Put your hands out the window?” her boyfriend questions.

“What the fuck did I do?” a bewildered Myabeatrize asks.

Multiple cop cars with flashing lights and sirens surround them in the video.

“Remain in there until we give you further instructions,” a police officer announces through a bullhorn.

“There’s a whole ass helicopter, do you hear that?” her boyfriend asks in the video.

“Oh no there’s so many cops! This is my first time getting pulled over,” Myabeatrize says, still in shock at the situation.

In the background, there is police chatter about how to best surround the car.

“You got that side? We got her side,” cops say off-camera.

Myabeatrize and her boyfriend explain the situation in a four-part TikTok video series, talking about how they were cruising around their own neighborhood with a GoPro when cops surrounded them.

Apparently, the police received a phone call from a neighbor that somebody was waving a gun around and mistook her boyfriend filming with a GoPro for a gun. Her car matched the neighbor’s description and the police immediately descended.

Myabeatrize says she and her boyfriend, who is Black, were racially profiled.

She also says the cops pointed guns at them, sent a K-9 to sniff around the car, and searched her vehicle. She emphasizes that they complied with the officers.

Many comments on the original video express sympathy and confusion at the situation. Others told her to sue.

“I would have sued EXPEDITIOUSLY,” another said.

The Daily Dot reached out to Myabeatrize for comment.