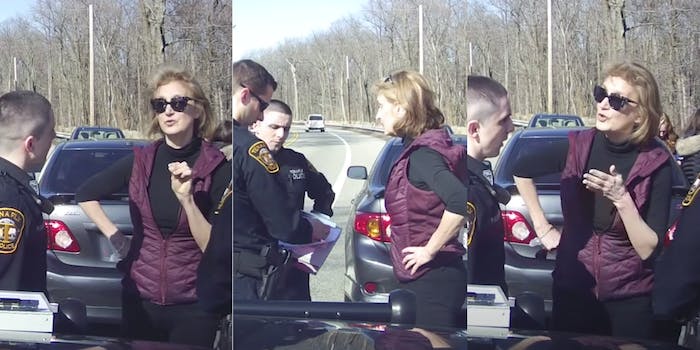 Over the last year, numerous flavors of Karen have emerged through viral encounters. The contemporary and extremely common anti-masker Karen has slowly replaced vintage Karens with no patience for the word “no.” Now, a new Karen has joined the mix, after a police commissioner named Caren was caught on camera belittling two police officers.

No really, her name is actually Caren with a C. Caren Turner, to be precise. A former police commissioner for the Port Authority of New York and New Jersey, Turner was captured bullying two police officers on dash cam footage.

The footage was originally captured in 2018 but has recently reemerged online. After it was shared to Reddit’s r/PublicFreakout this week, where it collected nearly 11,000 upvotes, the video migrated to r/FuckYouKaren, where it gathered an additional 8,000 upvotes in less than 10 hours.

The Reddit version of the video sees Turner confronting a pair of cops following a routine traffic stop. The officers appear to have pulled over Turner’s daughter and a few friends after they were caught driving an unregistered vehicle. Turner arrived to give the group a ride home, but was not about to let the situation lie.

At the beginning of the clip, one of the officers can be seen asking Turner if she is there to provide a ride. Claiming instead that she is there as a “concerned citizen and friend of the mayor,” Turner attempts to intimidate the officers into doing what she wants.

The officers politely refuse to deviate from the typical restraints of their job. They rebuff her attempts to leech information about the traffic stop from them, noting that she can ask the driver of the vehicle—who is over 18 years old—if she is curious. Turner, demanding that she be called “commissioner” throughout the interaction, insists that she’s “very involved,” with the situation.

Turner spends the majority of the video desperately attempting to throw her weight around. She informs the officers that she is “heading up over 4,000 police officers” in a clear attempt at intimidation. When one of the officers notes that Turners “demeanor” was getting in the way of a productive conversation, she becomes even more defensive.

She threatens to speak to the commissioner of police at Tenafly, presumably the precinct the two men work out of, before accusing one of the officers of not being able to “string a sentence together.” Never mind that it’s her interruptions getting in the way of his explanations.

Turner sarcastically thanks the officers for their help. Her inner Karen comes erupting forth when one of the officers tells her she “may take them now,.”

“You may not tell me when to take my child,” Turner says from uncomfortably close to the officer’s face. “You may shut the fuck up and not tell me when I may take my kid and her friends, who are Ph.D students from MIT and Yale. You may tell me nothing.”

Tuner even attempts to lord her three homes over the officers, despite their unyielding courtesy throughout the interaction.

In response to the video’s emergence online, Turner was pressured to resign her position as police commissioner. She later apologized, noting that “I let my emotions get the better of me and regret my tone toward the police officers and use of off-color language.” Tuner apologized for her language, but added that “at no point did I violate the Port Authority’s Code of Ethics or ask for special treatment for anyone involved, nor did I suggest, in any way, that I would use my position at the Port Authority to affect the outcome of the violations issued to the driver.”

Turner also attempted to shift blame onto the officers, suggesting that “the Tenafly Police Department review best practices with respect to tone and de-escalation, so that incidents like this do not recur.”

The Port Authority of New York and New Jersey didn’t agree with Turner’s version of events. A statement from the department called Turner’s actions “outrageous and abhorrent” and noted that she “clearly and unambiguously” violated the board’s code of ethics.

“The conduct was indefensible,” the statement reads. “Commissioner Turner’s resignation was appropriate given her outrageous conduct.”

Turner was never charged by police. She has since faded into the woodwork, but people in the comments labeled her as “Karen patient zero.”