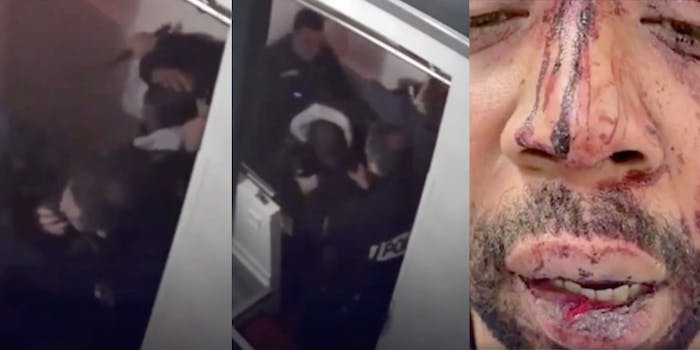 The video surfaces amid criticism of a bill that would prohibit sharing footage of French police.

A disturbing viral video showing Paris police beating a Black man in a music studio is causing an outcry across France.

A security camera captured footage of the harrowing encounter. It began as music producer Michel Zecler was returning to his studio on Nov. 21. As he neared the door, Zecler spotted a police car on a side street in the upscale, residential area near which his studio is located. He rushed inside, not wanting to face a fine for his lack of a mask, and three officers followed him.

The video shows Zecler mildly resisting as officers attempt to restrain him. The next several minutes see a brutal beating take place, as officers pummel Zecler with their fists, knees, and police batons. According to an interview with Loopsider, one officer called Zecler a “fucking [N-word]” when he attempted to explain the situation.

Thankfully, a group of musicians who had been recording in the studio basement overheard the scuffle and Zecler’s calls for help. They arrived in time to force the Paris police officers back outside just as more cops arrived and attempted to force their way into the studio. When their attempt failed, the police threw a tear gas canister through the window and pointed guns at the door.

This urged Zecler and the musicians out onto the street, where police arrested them. The nine men who came to assist Zecler said police also hit them as they arrested them. They were released the same day with no charges, but Zecler was held for 48 hours before his release.

Initially, Zecler was accused of resisting arrest and violence against the police, but the charges were dropped after his lawyer presented the security footage of the incident.

The Zecler controversy comes amid a major outcry in France against a new bill that would prohibit sharing footage of police officers. Under the new security bill, anyone who broadcasts “the face or any other identifying element” of an officer with the goal to “physically or mentally harm” them could face a year in prison and a $54,000 fine.

The bill is widely opposed by the French public, many of whom want a proper review of the French police force in the wake of George Floyd protests across the United States. Language in the bill discourages bystanders and journalists from obtaining and sharing footage of police brutality. Critics of the bill cited Zecler’s assault as proof that citizens should be able to share such footage, arguing that the video demonstrates clear police brutality and racism.

“Without the videos nothing would have come out,” Julien Bayou, national secretary of the Europe Écologie Les Verts party, wrote on Twitter. “Videos that you want to ban. To protect police officers who carry out their mission with integrity? Or to guarantee the impunity of this behavior that dishonors the uniform?”

Following Zecler’s arrest, officers claimed via Agence France-Presse that they were attempting to stop him for his lack of a mask, which are currently mandatory in France. The officers alleged that when they attempted to stop Zecler, he resisted and pulled them into the studio, where he then tried to grab their weapons and strike them.

The footage captured by security cameras—of which the officers were not initially aware—debunks this claim. The video shows the police following Zecler inside of their own volition, and it shows no clear sign of him reaching for a weapon or reacting violently. He does occasionally attempt to protect his head and face from the officers’ blows.

In response to the released video, the French government announced it would establish a special commission headed by France’s human rights watchdog, the New York Times reports. The commission will explore ways to rewrite the provision that would prohibit sharing videos of police.

French interior minister Gérald Darmanin defended France’s police force as a whole but condemned the actions of the officers seen in the footage.

“They sullied the uniform of the Republic,” Darmanin told France 2 television yesterday. He defended the “vast majority” of security forces, however, noting that they act professionally in their day-to-day tasks.