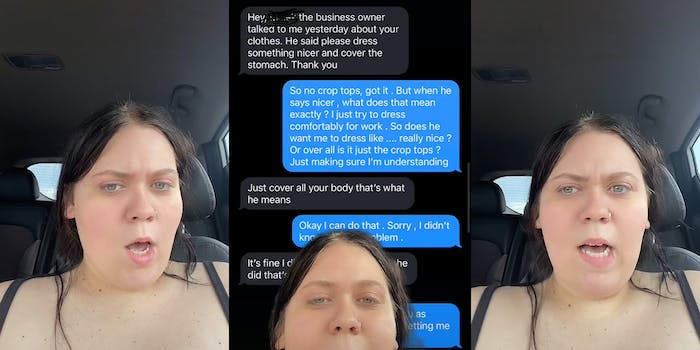 ‘I wanted to be able to wear what I was comfortable in, just like everybody else’: Plus-Size TikToker says boss told her to ‘cover all her body’ at job that doesn’t have a dress code

A TikToker says she quit her job at a smoke shop after she was “dress-coded” at her workplace which does not have official guidelines for how its employees should dress for work. The video, which was posted by Abigayle Canterbury (@abigaylecanterbury), has drawn over 200,000 views on the platform.

The difference between what she wore to work, and what other employees were wearing to work, Canterbury says in the video, is that she is the only plus-sized female employee.

“I’ve never been into one of their locations and seen a bigger girl working, it’s always been small, petite girls, and they’ve always worn whatever they wanted, which when I got this job was one of the reasons I was kind of excited,” she says in the video. “I’m like, ‘hell yeah, I can dress cute, I can dress however I want,’ obviously not pushing the boundaries because I know that they are going to be there given it’s a job, but I was under the impression I could wear a crop top with some jeans and that’s not a big deal.”

In her video, Canterbury shares a screenshot of a message exchange between herself and her boss at Up N smoke, the shop which seems to be in Mobile, Alabama, according to Canterbury’s TikTok hashtags. The screenshot shows the message where her manager tells her that the owner of the shop did not want her to wear a crop top anymore, telling her to “cover all (her) body.”

“So initially the way that he worded that did get under my skin,” she says in the video. “‘Cover my body?’ Have you seen your other fucking employees, bro?”

Canterbury then asked some of her coworkers if they’d been dress-coded in their time working there. For the most part, her coworkers said they had not experienced that. In a follow-up video, she says that her manager heard she was complaining about being dress-coded to the other girls and that there are microphones and cameras in the store that allow him to be aware of everything going on.

“It just really made me feel singled out that y’all told me that I should cover my body but I’m coming to work with girls that are dressed the way I would normally dress,” she says in the video.

In this discussion with her manager, she says she was told to stop talking about being dress-coded and was accused of seeking a raise after only being employed there for a few weeks. The creator clarified that that was not the case, as she had been discussing her preference to work her way up in the company with another manager.

“I have too much respect for myself to stay in a predicament or a job situation where I’m made to feel bad for being myself,” she says. “Especially in something like dress code areas, not only is that some stupid fucking shit, but it is blatantly discriminatory, honestly. I’m glad that these girls felt comfortable enough to wear whatever they wanted, but the whole point of all of this is the fact that I just wanted that same treatment. I wanted to be able to wear what I was comfortable in, just like everybody else.”

Commenters shared similar experiences they had with fat-shaming.

“I had a coworker make news stories because a restaurant fired her for her weight not meeting dress code,” one commenter wrote.

“I’ve dealt with something like this,” another commenter wrote. “As soon as they said, ‘well that’s all,’ I said, ‘yes I’m done here’ and walked out. Best feeling EVER.”

“So something similar happened to me with jeggings at my job,” a commenter wrote. “Bigger girls shouldn’t wear them. But petite girls are ok, just not big girls.”

The Daily Dot has reached out to the creator via Instagram direct message.