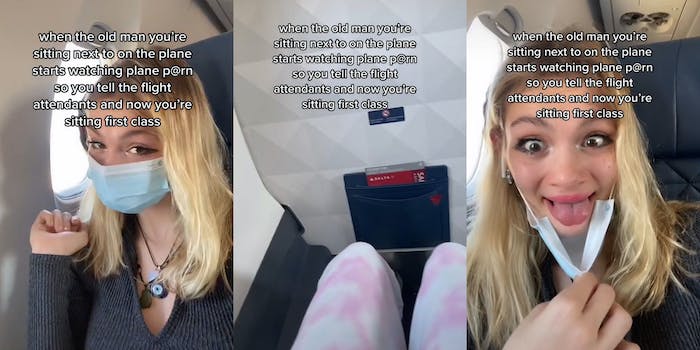 'I’m not sure he got any punishment whatsoever.'

The accompanying video appears to show the 19-year-old, who disclosed her name and age to the Daily Dot, sitting in the first-class portion of the plane as the trending “Material Girl” sounds plays in the background.

“Only cried for like 10 minutes so we’re gucci,” she added in the video description.

Speaking to the Daily Dot, Schofield said that the man’s concerning behavior started the moment she sat down next to him.

“He immediately he took up as much space as possible, it seemed like he was trying to touch me and make me uncomfortable,” she said. “He used both arm rests so that I didn’t have one and forced me to be squished against the side of the plane.”

Schofield said that this behavior made her feel “unsafe,” and so she began “analyzing him.”

“Within five seconds of looking at him, I notice he is typing on his phone, ‘sex on a plane’ and he begins watching pornography of people having sex on a plane,” she said. “I immediately panicked but I held it together.”

only cried for like ten minutes so we’re gucci

She told the Daily Dot that the flight attendants initially didn’t know what to do, but said that they took her to first class when she said she wanted to be moved away from the man.

“For the entire flight I was upset and scared. But I’m grateful the flight attendants helped me and that I was able to get out of an unsafe situation,” she said. “I don’t think the creep was removed from the flight. I’m not sure he got any punishment whatsoever.”

“He’s clearly fantasizing about having sex on a plane and she’s the closest female to him. It’s not a stretch to think he might be thinking of her,” one comment said.

The majority of comments rallied behind Schofield. “I’m so sorry, that sounds so traumatic,” one said. “This world… unbelievable,” another added.

One comment with over 2,000 likes read, “The fact that you said something is so commendable because a situation like that you can feel so frozen and scared.”

Several other users, who appeared to be women, also commented sharing similar experiences they and other female family members have had—both on a plane and in other public places.

But not all commenters were supportive. “A lot of men were victim-blaming me and telling me I was overly sensitive and should not have been scared,” Schofield said. “And some men said I should not have looked at his phone, basically blaming me for the sexual assault I experienced.”