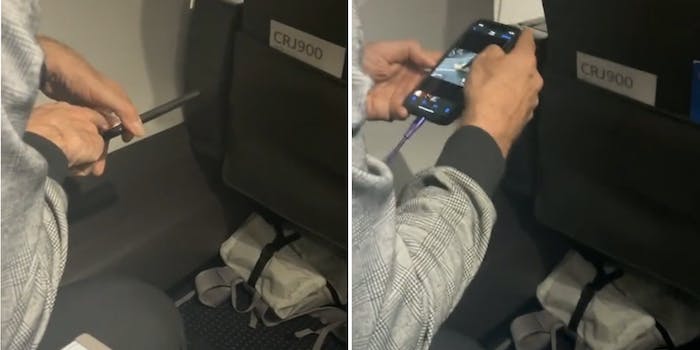 ‘Wtf am I supposed to say’: Woman seemingly catches neighbor on plane taking feet pics of her, editing them right in front of her

In the video, the man tilts his iPhone camera toward Alina’s feet and snaps a photo before reviewing it. The TikToker said in the comments and a follow-up that she did not know the man and that he proceeded to edit the photos in front of her. Alina uploaded the video to TikTok on May 11, and it has since garnered more than 3 million views. The video included the trending sound “the woman was too stunned to speak.”

“Cuz wtf am I supposed to say,” Alina added in the caption.

Thousands of comments were stunned that the alleged feet-pic photographer was taking the photos in plain sight. “The fact that he even looked at the pic in front of you after lmaooo,” one viewer commented.

“BRO DIDNT EVEN TRY TO HIDE IT,” another user wrote.

Other viewers assumed the man intended to sell the photos.

“I would have said ‘pay me and I won’t tell,” a top comment read.

Some viewers tried to give the man the benefit of the doubt.

“think positive, he might like the shoe she wearing and want to buy it for someone,” one wrote.

“Maybe his wife also has the same shoe as yours,” another commented.

Others, unfortunately, resonated with Alina’s TikTok. “This happened to me at a restaurant and his phone made a sound and flash pointed at my feet I still didn’t say nothing,” one said.

The Daily Dot reached out to Alina via Instagram message for this story.