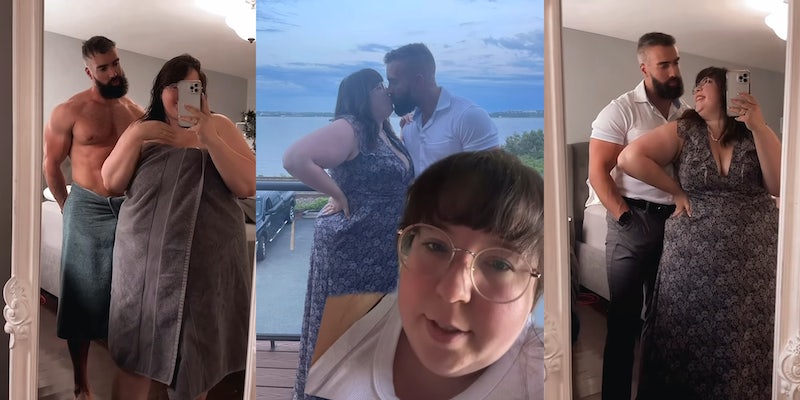 ‘You should be with someone that looks like me’: Woman says people are criticizing her marriage with a ‘physically fit’ man

'The world has literally taught us that we have to value our worth on our bodies.'

After posting a video of her and her husband dressed up for an event, TikTok influencer Alicia McCarvell says that a woman messaged her husband, Scott, saying that he should be with someone who looks like her rather than McCarvell.

McCarvell, who has 4.9 million followers, posted the TikTok of her and her husband on Sunday. She posted a follow-up, which detailed the message Scott received and the hate she got, on Tuesday.

McCarvell explains that “by beauty standards,” she and Scott “don’t make sense,” and that the world values her husband more than her because he is thin. In response to her video of her and her husband, McCarvell says that people try to either discount her husband (one comment she received assumed Scott is gay) or her (another assumed she must have hired him as an “escort”).

“We’ve been made to believe that somebody who is physically fit like Scott could never in a million years be in love with or compatible with a fat woman,” McCarvell says in her follow-up TikTok. “That’s solely because the world has literally taught us that we have to value our worth on our bodies.”

The TikToker also says that the woman who contacted her husband was thin and “by beauty standards, a 10 out of 10” but that “people’s values don’t lie in how well their bodies fit into society’s trash beauty standards.”

let’s address the trash beauty standards in the room ||••

McCarvell also posted a video showing more of the comments she got on her video of her dressed up with her husband. Some assumed Scott was cheating on her, that McCarvell was Scott’s sugar mama, and that her husband was just waiting to collect insurance money after McCarvell dies.

Commenters on both of McCarvells videos that showed the hate she got agreed with her point: People were cutting her down because of the rigid beauty standards that had been ingrained into them.

“It never fails to amaze me how sad and bitter people are to project their own insecurities and failures onto others,” user @langbang02 commented.

“I literally am appalled by the response you get,” @justclassicallycassidy wrote. “I see a beautiful couple who loves each other and have immense value individually and as a couple.”

“The comments come from pure jealousy. People wanna be loved so badly and can’t handle it when someone else receives that. It’s sad,” @bonnieleetoks commented.

The Daily Dot reached out to McCarvell via email.