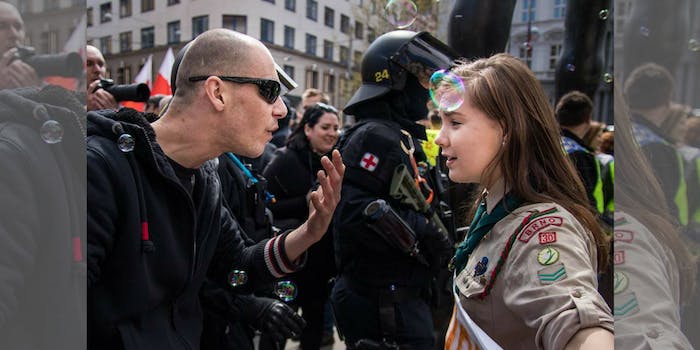 The viral photo has become a symbol of resistance.

In a prime example of what it truly means to be a fearless girl, a photo of a female Czech Scout and a Neo-Nazi facing off during a protest has gone viral.

According to photographer Vladimír ?i?manec, he took the image during a protest countering a march led by the Workers’ Social Justice Party, the Czech’s far-right nationalists, also known as the DSSS. Czech non-profit ROMEA reported that approximately 150 Neo-Nazis associated with DSSS were drowned out of their own demonstration by the 300 or so drummers, dancers, sign-holders, and other distractors counter-protesting.

Over the course of the Monday’s events in Brno, 11 people from both groups were arrested and 50 of the counter-protesters were temporarily detained after several attacked police and others sat on tram tracks to block the Neo-Nazis’ paths. However, the Facebook event for the counter-protest was not intended to be about hostility but instead about fun, as it was called “Kdo si hraje, nehajluje,” a phrase organizers interpreted as “You can’t salute the Nazis if you’re having a good time.”

Counter-protesters had organized art, games, and other activities to distract from the n=Neo-Nazis—which is how one young girl, a Czech scout, found herself face-to-face with a Neo-Nazi during the event. In the photo, she’s slightly smiling with her mouth open, bubbles composing her aura, as the Neo-Nazi demonstrator animatedly speaks at her, from behind sunglasses.

Petr Van?k, the communications and community impact director of the Czech Scouts and Guides, confirmed with the Daily Dot that the young woman is a member of Junák Czech Scouting.

“We are happy to see this kind of action from young people in scouting since it shows scouts’ appreciation of respect of diversity and peaceful cooperation and at the same time the condemnation of hatred,” Van?k told the Daily Dot. “We believe this picture belongs to some of the best demonstrations of what role scouting plays in the life of a young person, leading them to not only be better people, but empowering them to stand up to protect the values scouting is based on around the world.”

?i?manec, the photographer, told the Daily Dot via Facebook Messenger about the context of the encounter. “It all started with a guy from the anti-fascist side trying to explain that the concept of ‘nation’ is obsolete and should be transgressed to the Neo-Nazi,” ?i?manec wrote.

Another photo of the scout pre-Neo-Nazi run-in shows a more complete image of the sign she’s holding, which sports the logo of the World Organization of the Scout Movement and the saying, which, translated in English, reads, “We will raise your children.”

Another image taken at the protest shows the girl with two other male scouts.

In a video put together from a commenter on the original Facebook image, around the 20-second mark, the girl can be seen giving the same Neo-Nazi a smile, a shrug, and a headshake like the calm badass she is as he continues to keep on talking.

Honza Pobo?il, the videographer who captured the “conversation,” told the Daily Dot that the area during the protest was heavily policed. Pobo?il translated a message the girl had shared on ?i?manec’s post, as well.

In other comments, the scout wrote that she believes in the power of non-violent expression and that the photo clearly shows a conversation with a man “whose views oppress others.” She’s not a hero, she wrote—she wanted to show that Brno stands together against hate.