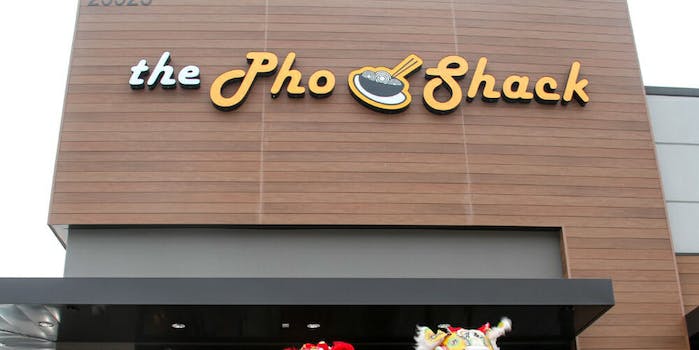 Even regulars are editing old reviews to one-star.

Texas restaurant the Pho Shack is at the center of social media backlash after a former manager shared a screenshot of a co-owner calling her the N-word and a bitch.

On Friday, Domo Schneckenburg quit her job of over two years as general manager of two Pho Shacks, in Katy and Sugar Land, calling to give her boss notice. The call went fine, but afterward, her boss texted the other owner, Danh Le, to tell him the news and he responded angrily, saying, “Fuk the n*****” and “Don’t like that bitch attitude anyways.” This exchange happened in a group text that Schneckenburg was also a part of. When she responded, her boss didn’t apologize or acknowledge the slur, instead just saying, “Leave the key with Wilber for me. If u want your last check. Close tonight out correctly and professionally.”

Schneckenburg took to Facebook the next morning to share what happened, where she described the experience as a “rude awakening.”

“I won’t lie and say I wasn’t surprised by his reaction because I was,” wrote Schneckenburg. “Regardless of how long you have known them, how hard you have worked, how trustworthy you have been, whether or not the family knows you, etc. You’re still a n***** in their eyes.”

So as most of you know, I have worked at The Pho Shack for over two years. I was there since the grand opening. I was…

Over the weekend, Schneckenburg’s post was shared over 10,000 times. A local BBQ restaurant posted that it ended their partnership with the Pho Shack. People called the restaurant to complain and review-bombed both locations on various platforms. On Yelp, multiple former customers, including self-described regulars, edited former positive reviews to reflect their anger over how the owners treated Schneckenburg. Former employees commented on Schneckenburg’s post about the owner’s bad behavior.

“What yall dont get is they’ve been this unappreciative of Domo,” commented Andre Harrell. “Store runs mid shift cause the owners were missing this or that. Late paychecks. They’d cheat her out of paychecks to the point where she had to start calculatung [sic] her hours her self.”

The Facebook pages for the Pho Shack Katy and Sugar Land have been taken down, but before that happened two apologies were posted. The Katy location posted an apology from the team and stated that they had terminated their partnership with Le. The Sugar Land apology was written by Le himself, who made the excuse that he’d grown up around people using the N-word casually, and said, “but that stops here.”

While the partnership is supposedly over, commenters pointed out that since the Pho Shack is owned by Le’s wife and brother, he will still likely profit from it.

The Daily Dot has reached out to Domo Schneckenburg and the Pho Shack and will update the story with their responses.