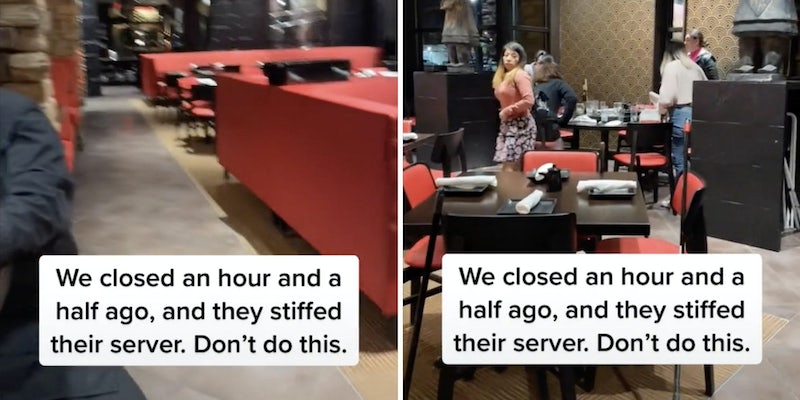 ‘Don’t do this’: P. F. Chang’s worker films customers who stayed an hour after close and ‘stiffed’ server on tip, sparking debate

'Y’all don’t get embarrassed when you’re the only people left in the restaurant?'

A viral video from a P.F. Chang’s employee shows customers leaving their table while the restaurant is completely empty.

TikTok user @blondeboy93, who posted the video, said via overlay text that the group stayed an hour-and-a-half after the restaurant closed and “stiffed” their server, presumably on the tip.

“Don’t do this,” the TikToker urged in the overlay text. @blondeboy93 captioned the video saying that there is a “special place in hell for these people.”

The video has been viewed over a million times. The TikToker clarified in the comments section that they were not the server for the table in question.

Many commenters on the video didn’t entirely agree with @blondeboy93’s interpretation of the video.

“Restaurant should not have allowed a customer to stay an hour and a half late,” @jamestrig commented.

“The manager is to blame,” @hauntedportals wrote.

Others disagreed with @blondeboy93’s condemnation of the customers not tipping, arguing the onus should fall on the workplace, not customers.

“We don’t employ servers the job that hired them does,” @bulkmeup33 wrote.

But some similarly felt the customers were in the wrong.

“If I was that server, I would’ve def said something and then quit. Sometimes your self-respect is worth more than putting up with this kind of shit,” @lvguy07 wrote.

“Like y’all don’t get embarrassed when you’re the only people left in the restaurant & im mopping the other side? like cmon now take the hint and leave,” @w0rshipper commented.

The Daily Dot has reached out to @blondeboy93 via TikTok comment and emailed P.F. Chang’s.