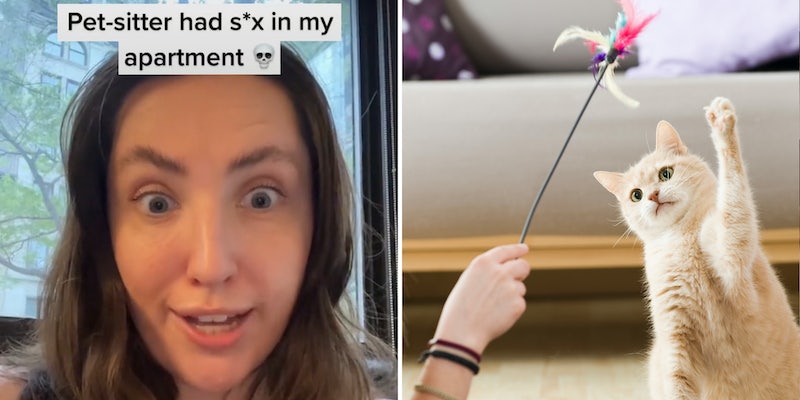 ‘Some people are the worst’: TikToker claims pet sitter had sex in her cousin’s apartment while she was gone

A woman on TikTok says that a pet sitter had sex in her cousin’s apartment while she was away on a work trip.

The TikToker, known as Kaley (@thekaley) on the platform, said in a video that the pet sitter was also her cousin’s then best friend. After what happened at the apartment, they weren’t friends anymore.

“Another day, another NYC drama,” Kaley wrote in the video’s caption.

When the cousin called Kaley at 3 a.m., it was because she had just logged into the security camera app on her phone. Footage showed that the cameras had been turned around by the friend watching the cat, and Kaley could hear her having sex with someone in the background.

Also, Kaley says she found menstrual blood stains on her cousin’s couch, a blood-stained towel in the shower, and pubic hair in the bed.

“It was disgusting, it was a mess,” Kaley says in the video.

“Like, miss girl, your job wasn’t to go have sex in my cousin’s bed and leave dishes in the sink and period blood everywhere,” Kaley says. “Your job was to feed the cat, and you didn’t even do that one job.”

The incident convinced Kaley to get her own security cameras for her apartment for when people come to take care of her dogs, she says.

“Even your best friend will lie and have sex in your bed, then say it didn’t happen and then gaslight you and make you think that everything that happened was your fault,” the TikToker says.

Kaley confirmed that the cat was safe, and she took over the job of feeding it until her cousin returned. In a comment on the video, she said that she’s going to pet sit the cat from now on.

Viewers were in disbelief.

“I AM SCREAMING,” one viewer commented in all caps.

“the fact that she still lies with proof is insane!! Also how is she gonna lie with literal blood stains,” another viewer commented.

“That’s so gross. Omg some people are the worst,” one viewer said.

One user asked if the cousin was able to clean the menstrual blood stains out of the couch and bedding, and the TikToker replied that they used shampoo on the couch, but the bedding was still “tbd.”

The Daily Dot reached out to Kaley via TikTok comment.