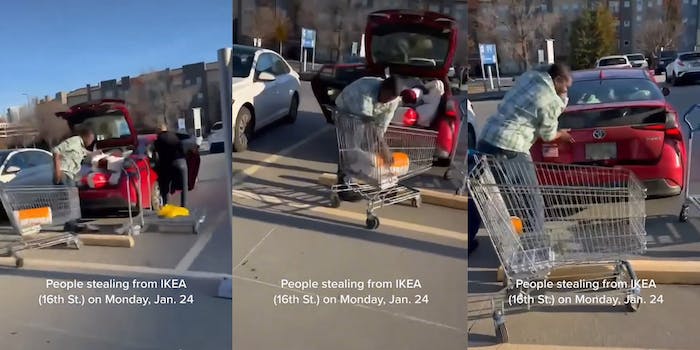 'They will be building furniture for days!'

The Popular Atlanta TikTok account @atlscoop went viral once again after posting a video of people allegedly stealing from an IKEA on Jan. 24th.

The account, which specializes in sharing alleged criminal acts and other current events happening in Atlanta, has gained more than 200,000 views on the video.

In the TikTok, the cameraperson films at least three people hurriedly packing IKEA bags into a red Toyota Prius. One of the people stuff the trunk with enough merchandise rendering the trunk unable to close. “They didn’t pay for any of that,” someone behind the camera says.

The text overlay of the clip likewise levies the allegations against the group.

“People stealing from IKEA,” it reads, adding the alleged date it happened.

Many TikTokers were dumbfounded as to why anyone would steal from IKEA, which is generally known to be budget-friendly. The Swedish-founded company is widely popular for its “DIY”-style of household shopping and has a reputation for easy and inexpensive furniture assembly.

“Jokes on them!” the top comment read. “They will be building furniture for days!”

“The estimated total value of the stolen property was just over $36. Unreal,” one commented.

“Why steal from IKEA? Everything in there is so cheap!” another questioned.

Other TikTokers were divided over the clip. Many condemned the actions of the group, while others said they’d “mind their own business” if they saw them.

“Ikea is going to be ok…” one user responded.

“Who are they hurting???” another wrote, adding that people go to great lengths to defend capitalists.

The Daily Dot has reached out to @atlscoop and IKEA via Instagram direct message and email respectively.