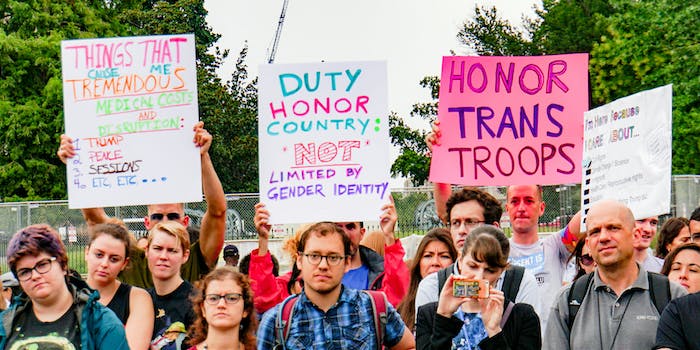 So much for the trans military ban.

“The Department of Defense confirms that as of February 23, 2018, there is one transgender individual under contract for service in the U.S. Military,” Maj. Dave Eastburn said to CNN yesterday.

Before the Pentagon began accepting transgender enlistees to join the military, the U.S. armed forces already served as a major employer for transgender Americans. The National Center for Transgender Equality estimates that over 134,000 American veterans are transgender, with 15,000 transgender people currently serving in the armed forces.

However, Monday’s announcement signifies a change for the Defense Department, as out and transitioning transgender Americans previously weren’t allowed to enlist in the military. Only closeted or pre-transition transgender service members could join. Now, any transgender person can sign up to serve.

In the meantime, Defense Secretary Jim Mattis has reportedly given his recommendation on transgender troops to the White House. A report from Fox News suggests that he supports transgender service members in the military, provided that troops are deployable within a year’s time.