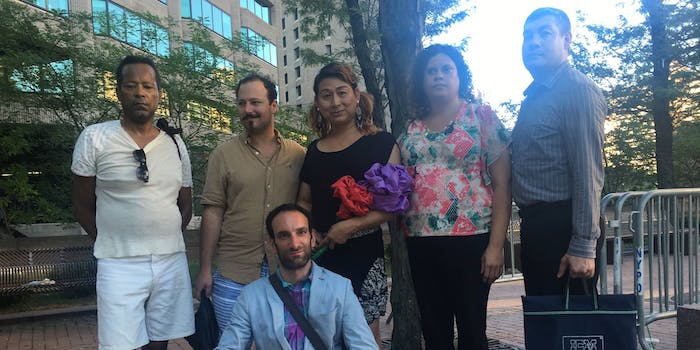 A video of a trans woman's attack got thousands of views. But just seven showed up to her rally.

On April 28, Pearl Love, a transgender woman, was verbally and physically attacked on the New York subway by a stranger. On May 2, Love posted the video to Facebook, where it quickly spread. It now has over 400k views, was reported on by numerous news organizations (including the Daily Dot), and even elicited a response from Hillary Clinton.

However, if you didn’t know what you were looking for, it would have been difficult to spot the rally for Love yesterday. Across One Police Plaza in Manhattan, a team was busy cutting down a tree that had fallen on a lamppost. The noise from the chainsaw was enough to drown out any chants, if they had been chanting at all. Instead the group stood around, looking, waiting to see at least a fraction of the support they saw online.

Over 600 people were invited to the rally, organized by Everything Transgender in NYC, and on the Facebook event page, 48 said they were coming. Love’s Facebook page was full of people sharing the event, urging others to go and show their support. And yet, by 6pm, there were just a handful, including me and one other person who appeared to be from the press. “We thought it would be a bigger crowd,” said Jennifer Louise Lopez, the organizer and founder of ETNYC. 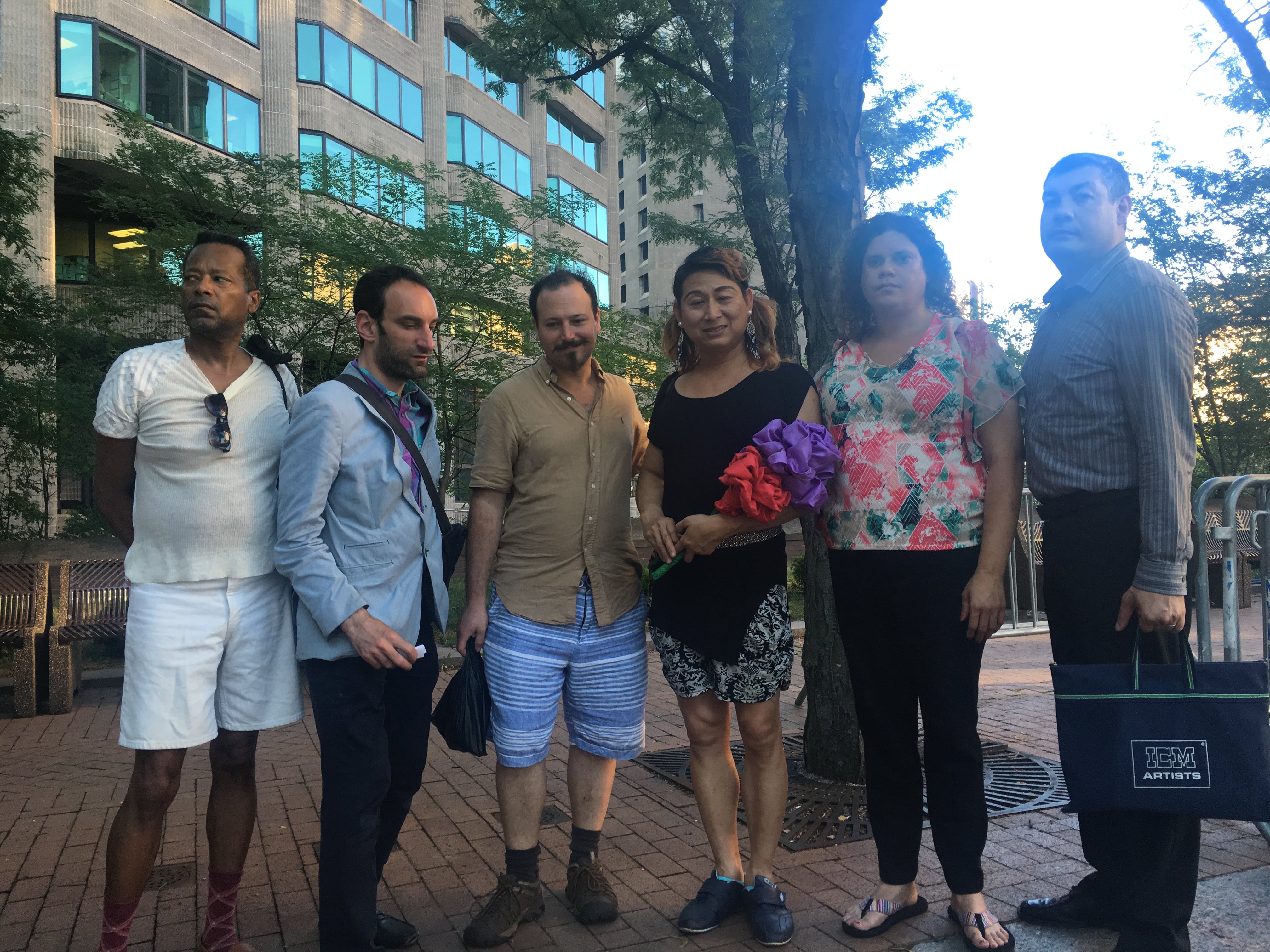 Attendees for the Rally for Pearl Love (Love, fourth from left)

The rally was organized to demand a harsher punishment for Eldridge, 27, who has been charged with two misdemeanors, one as a hate crime. However, Eldridge has no prior criminal record, and is expected to serve community service or be ordered to anger management classes.

The issue the group is most concerned with Eldridge’s lack of remorse for her actions. In fact, she told Pix11 shortly after the attack, “I meant what I said. That person offended me in a way.” According to ETNYC, “Eldridge’s charges are not adequate, as they do not reflect the severity of her actions, and they fail to deter future attacker with similar agendas.”

At yesterday’s rally, Love told me she doesn’t want Eldridge to go to jail (the highest penalty possible is 364 days). “She needs a lot of help,” she said. “She might hurt somebody else.”

Love said the video that went viral was one of three she took that day—another features Eldridge saying she’d slit Love’s throat. Love hoped that the video could educate people to the sort of violence she and other trans people experience regularly. “She’s just one case,” Love says about Eldridge. “It happens all the time.”

There are a number of factors as to why social media outrage and national news coverage didn’t translate into more bodies at the Pearl Love rally: It’s summer, it’s hot, it’s easier to not go somewhere than it is to show up. There’s also the setting: One Police Plaza, chosen because the group expected a larger crowd, is not the most enticing place for the LGBT community. “Many LGBT people, especially trans people, have been abused by the police,” said Lopez. “They don’t want to be close to the police if they can help it.”

But the small turnout also illustrates the shortcomings of internet activism. It’s good for the first part, provoking outrage and spreading awareness, but when the time comes for action, people are harder to motivate.

Part of the problem is no one wants to admit how arbitrary virality is. Lopez was also the victim of a subway attack earlier this year, one that left her needing eye surgery. She too recorded video of the attack, which shows her attacker being held back by a group of people. Another man emerges from the group and yells, “You’ve got fucking balls. Sit the fuck down and shut the fuck up.”

However, Lopez’s video has fewer than 3,300 views.

Maybe Love’s video went viral is because, in it, she is, for lack of a better term, the perfect victim. Lopez’s video is not as clear as Love’s. If you didn’t know the backstory, it’d be hard to tell just who is doing what and who’s in the wrong. Love’s, on the other hand, clearly shows a woman screaming obscenities and insults, and eventually rising to attack Love. It is a video of unprovoked hate spewing forth at an innocent woman just trying to ride the subway. Love never responds, never fights back, just passively records what is happening as she tries to keep herself safe.

That’s what made it easy to share. There’s no way to defend anyone else but Love, no gray area to get caught in.

But even though Love is a perfect victim, her video is where many of us leave her story. An awful thing happened, we saw it, we showed our support. Given our complicated court system, that often feels like all we can do.

If yesterday’s rally was bigger, there’s no guarantee it would have affected Eldridge’s sentencing, or made her understand her mistakes. But as it was, it just showed virality isn’t where justice ends.