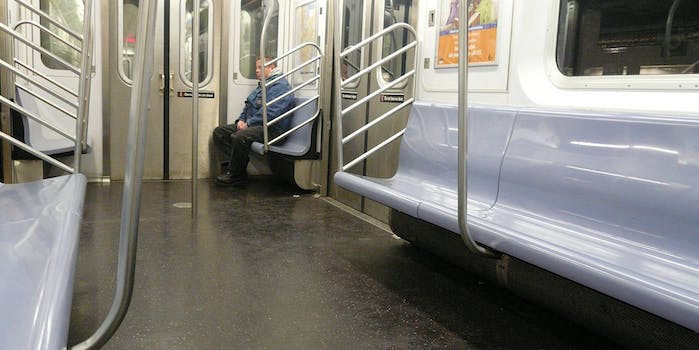 The attacker in the video begins by verbally harassing the woman and then physically assaults her.

People often assume that New York is full of liberal, tolerant people, a place where people will at least keep their mouths shut on the subway about things that don’t concern them. But that wasn’t the case for Pearl Love, a transgender woman who on Monday found herself on the receiving end of a litany of abuse, which began verbal and became physical, while riding the subway.

Love recorded video of the incident, in which a woman sitting across from her accuses her of “living in a man’s penis and body” and hurls racist remarks at her about her Asian identity.

In a text post accompanying the video, Love explained that she was on the 6 train to the Bronx, where she works as an outreach social worker, when the woman began to yell at her.

Love said she ignored the woman for a while but began recording when the woman’s yelling became louder.

“What are we supposed to do with you?” the woman yelled. “Because this s**t right here ain’t appropriate for my child.” She also asked, “Who are you really under all that makeup?”

Eventually, the woman attacked Love. “When I retreated,” Love wrote on Facebook, “she threw all my stuff on the floor and chased me around the train and [said] she [was] going to find a stick to hit me. It was a crowded train and everyone heard it but no one helped me. Guys acting like nothing happened.”

In a Facebook message to the Daily Dot, Love said, “My dear friends, thanks for your support.” She said she was busy studying for a citizenship test.

Love, who is originally from Taiwan, wrote on Facebook that things like this “happens all the time. But it’s my first time recording it.” The woman in question, she wrote, “has a lot to learn. She need education [about] how to respect [and] learn not to be discriminatory against the Trans Community [sic].”

In March, New York City Mayor Bill de Blasio issued an executive order letting transgender people use whichever bathroom corresponded with their gender identity, a sharp contrast to policies in states like North Carolina that have restricted the rights of transgender individuals.

“We want people to know they can go about their lives and not be excluded,” de Blasio said.

But even in places where the law is on their side, transgender people face disproportionate levels of violence.

According to the National Coalition of Anti-Violence Programs, 72 percent of hate-crime homicides in 2013 were of transgender women, and transgender people were seven times as likely to experience “physical violence when interacting with the police compared to cisgender survivors and victims.”