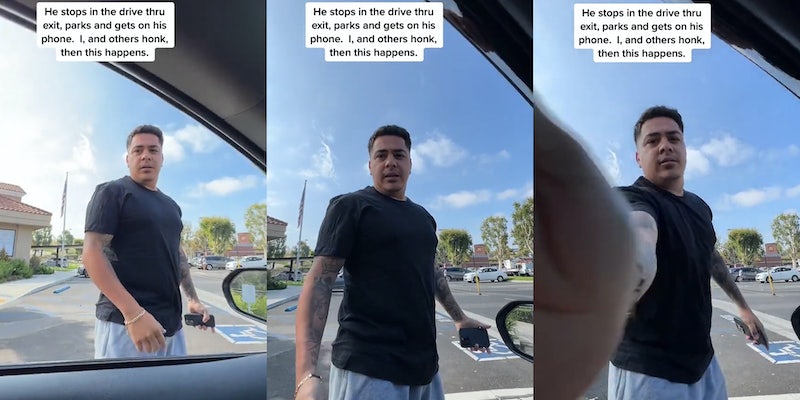 ‘He will do this to the wrong person one day’: Drive-thru patron gets out of car and smacks phone out of TikToker’s hand

'Once someone gets out of his or her car they don't have good intentions.'

A TikToker says a drive-thru patron got out of his car in a fit of “road rage” after he honked at him, showing the man smack his phone out of his hand.

In the video posted by TikToker OCMotivator (@ocmotivator) on July 25, he shows a clip of a man approaching the driver’s side window of his car. Text overlay reads, “He stops in the drive thru exit, parks and gets on his phone. I, and others honk, then this happens.”

In the clip, OCMotivator asks, “Why won’t you go? You’re sitting in the drive-thru for no reason?” When the man sees that he is filming, he slaps the phone out of OCMotivator’s hand.

@ocmotivator #roadrage at its best. He orders, they ask him to park in front. He decides to park IN the drive thru stopping its flow. I wait…. Honk, he gets out and loses it. #fyp ♬ original sound – ocmotivator

The video has garnered over 1.5 million views as of July 28 and is captioned “road rage at its best. He orders, they ask him to park in front. He decides to park IN the drive thru stopping its flow. I wait… Honk, he gets out and loses it.”

In the comments, users warn against engaging with angry drivers once they exit the vehicle.

“That’s considered aggression if he gets out of the car and comes to you,” one commenter said.

“Once someone gets out of his or her car they don’t have good intentions. don’t give them the opportunity,” another wrote.

Others questioned OCMotivator’s decision to honk and record, pointing to the driver’s reaction when seeing he was being recorded.

“That’s why you Gotta be patient my friend you don’t know who you’re dealing with,” one user wrote.

“Everyone with their stupid phones. Don’t agree with this guy’s actions, but damn, the phones are out of control,” another said.

The Daily Dot reached out to OCMotivator via email.