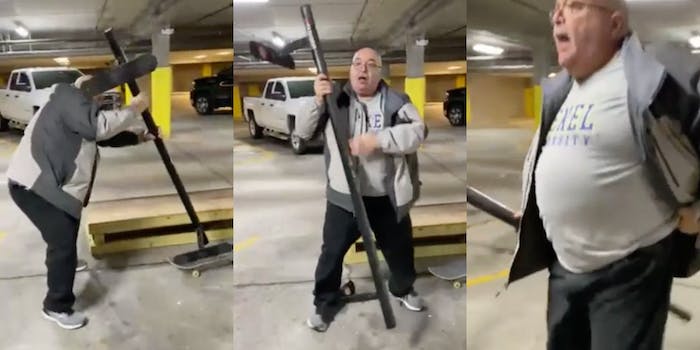 ‘That guy needs to mind his business’: Male Karen screams at teen skaters, seemingly threatens them with their own rail

The skaters can be heard apologizing in the background and asking the man to calm down.

A male Karen was caught on camera harassing a group of kids with skateboards in a parking garage.

The video footage was posted in the subreddit r/PublicFreakout by u/ArmaVETT and has since received about 7.5 thousand upvotes and a lot of angry comments.

The man can be seen banging the kids’ skate rail against one of the skateboards in what appears to be an attempt to break the skateboard in half. When the attempt failed, he whipped around to yell at the kids that they’re not supposed to be in the parking garage. The skaters can be heard apologizing in the background and asking the man to calm down.

He repeatedly yells, “go,” then appears to move forward to strike the kids with the skate rail. One of the skaters call the man a “fucking asshole” and another asks what his problem is.

The man angrily answers, “My problem is you assholes being down here in a personal garage.”

Although it’s unclear where the parking garage is, one of the kids said that their aunt lives there. In response, the man said, “Good, go get your aunt and tell her that you’re an asshole.”

The man finally threw the skate rail aside before stalking back to his car, still shouting insults at the kids. He ended his tirade by yelling, “go the Hell home,” before driving away.

Viewers were quick to point out the kids’ skate rail, which the man was slinging around like a weapon, was likely brought to help avoid damaging the garage.

User u/smart42 commented on the post, “They even brought their own rail so they don’t damage the existing property. Get bent.”

Other folks were pissed that the Karen threatened minors with it.

User u/azdustkicker said, “The way he’s brandishing that rail at them could get him charges for threatening minors. Genius move, Brad. I’m sure your family are all very proud of you.”

Others said the Karen was just mad because he lacked the skill to skateboard with them.

“Guy is pissed that he could never kick flip,” one said. Another commented, “The guy is pissed he isn’t young anymore.”

However, there were some viewers with mixed feelings about the situation, saying the kids could have actually damaged some property or hurt themselves if they continued skateboarding.

U/ChiefFox24 explained how they felt, saying, “Mixed feelings…. most of the time with this situation, people can fuck off. However years ago, some people were skateboarding near my car and one stumbled sending the skateboard into the door of my car causing $400 in damage. Just do it in a place where an accident isnt likely to destroy something and they are good to go. I agree with you about the rail. They obviously had enough respect for peoples property to account for that part.”

Another user seemed to agree but also said, “That guy needs to mind his business.”