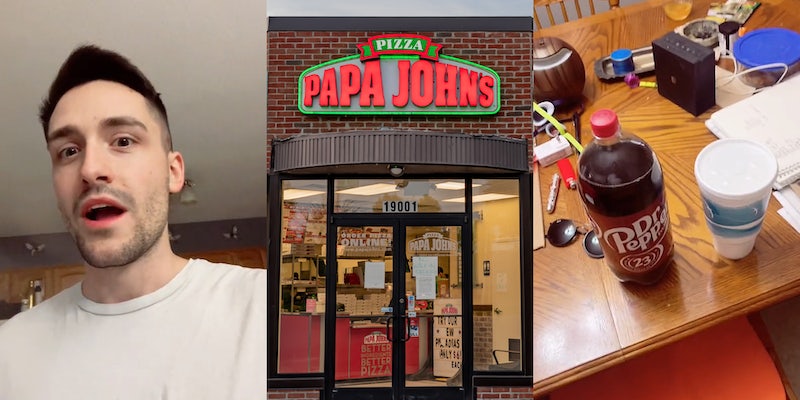 ‘We forget the sodas ALLLLLLL the time & do this more than you know’: Papa John’s delivery driver buys the 2-liter Dr. Pepper he forgot at gas station

A man went viral on TikTok after sharing how a Papa John’s worker went above and beyond—by buying the 2-liter Dr. Pepper bottle he forgot at a gas station.

The video features user River Thorne (@river.tho) as he shares the story of a recent delivery from he pizza chain. After ordering, the employees told Thorne it would take about an hour to deliver the pizza, which he brushed it off since it was Saturday and they were probably busy.

At 9pm, the pizza arrives on time and fresh—but the delivery worker forgot the 2-liter Dr. Pepper bottle

“I forgot your 2 liter,” the Papa John’s worker allegedly told the TikToker. “Let me go to the gas station real quick.”

This shocked Thorne, who claims “nobody’s done that ever when they forgot a 2 liter for me ever.” Without even thinking about it, Thorne hands the delivery driver $10 to pick up the soda. After he left, however, Thorne realized the delivery guy could keep the money left.

Thorne was pleasantly surprised when the man came back with not only the 2-liter soda but also a cup of ice since they were out of cold bottles. Clearly satisfied, Thorne says he tipped him $40.

The TikToker even thanked Papa John’s in his caption. “Dude went above and beyond thank you @Papa Johns,” he wrote.

The video has been viewed over 45,000 times since it was posted on Sept. 25, with viewers praising Thorne for being generous and the delivery driver for going above and beyond.

“That’s so cool, you are a great person for also being so generous,” one viewer wrote.

“@papajohns find this guy & give him a raise,” a third said.

Other viewers shared similar experiences when delivery drivers went out of their way for them.

“A Papa John’s driver forgot my honey mustard one time for wings so he stopped at dollar general and bought me a whole bottle,” one person shared.

“This happen on me when I was on vaca. the guy delivered my pizza forgot the drinks & ranch. he ran to gas station for drinks and a whole bottle ranch,” a second stated.

“One driver offered to go buy it for me once, I told him don’t worry about it, then he tried to give me his tip money to make up for it,” a third wrote.

In the comments section, Thorne revealed why he posted this video. “I order pizza all the time and they haven’t for me yet that’s why I was so excited,” he explained.

However, some viewers were critical of the situation, claiming that delivery drivers regularly “forget” things to earn extra tips from customers by going out of their way to pick them up.

“Oldest trick in the book…,” one person said.

“As a former pizza hut delivery driver, I can confirm we forget the sodas ALLLLLLL the time & do this more than you know & don’t say anything,” a third stated.

The Daily Dot reached out to Thorne via TikTok comment.