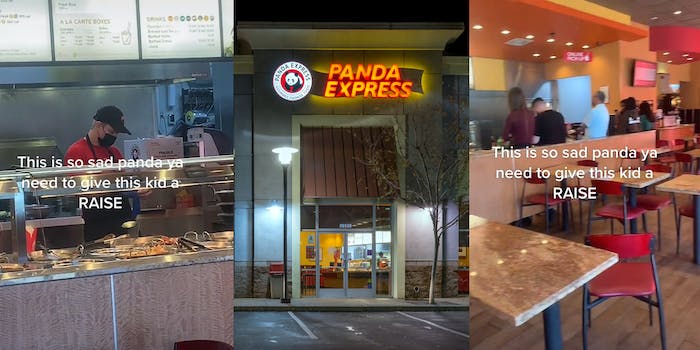 TikToker @tejeda.angelina97 posted a video clip of what appears to be a singular Panda Express employee manning an entire store by himself as a long line of customers waits to be served.

The creator pans the camera across the fast-food restaurant and there don’t appear to be any other employees aiding the young man who is behind the counter preparing meals. A text overlay in the clip reads, “This is so sad panda ya need to give this kid a RAISE.”

“This kid is running the whole store ALONE THIS IS CRAZY,” they added in the caption. The video has garnered over 1.2 million views.

This kid is running this whole store ALONE THIS IS CRAZY.

Viewers who saw the post sympathized with the worker’s plight. Some remarked that this was a clear sign upper management doesn’t care for the well-being of its employees. Others said that they were put in similar situations while working in the restaurant industry and attributed this kind of workplace atmosphere to why they ultimately decided to quit.

“Sadly corporate does not care for their employees,” one top comment read.

“Happened to me at mcdonalds. some woman had the audacity to complain to me about the wait,” another said.

“Lmfao they won’t. They will pay employees pennies compared to how much they make,” a viewer commented.

There were TikTokers who also put some of the blame on customers, with one viewer writing, “the fact that [people] still standing there ordering” instead of electing not to pile on with orders of their own.

“And people still decide to wait in line instead of going somewhere else.. I would feel bad,” one wrote.

The TikToker wrote in the comments section that they opted to leave the restaurant instead of making the young man work more than he has to.

A 2021 CNN article reported on the state of restaurant workers and how many “overworked” employees would walk out in the middle of their shifts. “Restaurants across the United States are understaffed, and jobs that were already stressful have gotten even more difficult,” the article stated. “Servers are stepping into other roles as overworked back-of-the-house employees quit, and sometimes seeing their tips ebb as they scramble to keep up with the new responsibilities. Fed-up colleagues sometimes quit in the middle of their shifts.”

Analysts have speculated that the COVID-19 pandemic greatly attributed to the “labor shortage” that is affecting businesses all over America. Both The LA and New York Times reported on this shortage being a “myth” stating that the real issue is a dearth of desirable jobs and salaries that would warrant people going into work.

In a January 2022 article, Restaurant Business Online reported that many restaurants have still kept their dining rooms closed well after COVID-19 mandates have been lifted in some areas because the locations are so understaffed.

The Daily Dot has reached out to the creator via TikTok comment and emailed Panda Express for further comment.