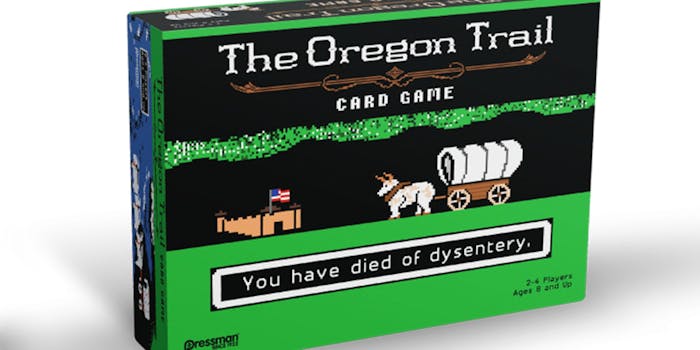 You can buy the Oregon Trail card game online

No need to break an axle getting to Target, just buy it online!

We must have died of dystentery and gone to heaven, because the Oregon Trail is back, only this time it’s a card game.

Target somewhat quietly released the Oregon Trail card game before it was quickly picked up by a redditor in Portland. Naturally, anyone who played the game as a child freaked out.

The multi-player tabletop version of the iconic computer game is the same concept, but with physical pieces. The goal is to get all the way through the Oregon Trail to Williamette Valley. You’ll fight pending dangers like dead oxen, starvation, poisonous rattlesnakes, and all the other unwanted surprises you’ll remember from the original game.

The Oregon Trail card game was created by Pressman Toys. It was originally a Target exclusive, but if you’re dying to get your hands on this game, you don’t have to risk diphtheria, because it’s also available online. The toy company is selling it on Amazon for $20.93.

Relive computer class and get it while supplies last. Buy it here.