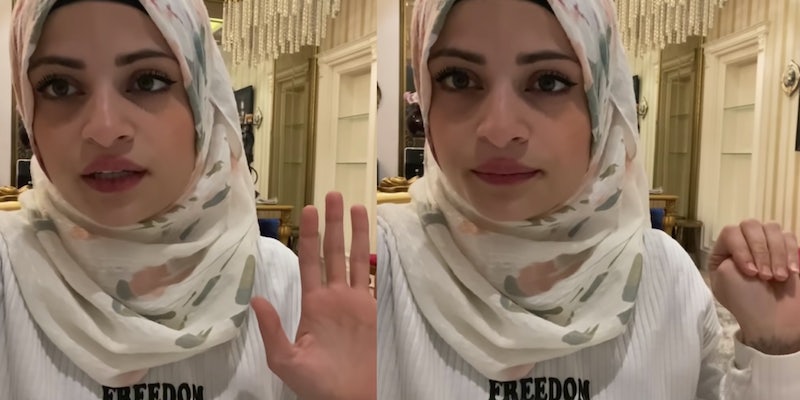 The hand gesture was created for domestic violence victims so that they can secretly ask for help.

Fans are worried about Om Sayf, a YouTuber with nearly 6 million subscribers, after she made a hand signal for help during what she called her “last” video on the platform.

The Turkey-based YouTuber uploaded the short video on Jan. 10. In it, she is wearing a shirt that has the word “Freedom” on it and spoke to her subscribers in Arabic.

“I spent the best two years on YouTube with you, I won’t upload any videos on my channel, however, I want to tell you something,” she says, according to a translation by news agency Australscope.

Sayf then raises her left hand, tucks her thumb in, and bends her fingers over her thumb, making a fist. Sayf makes a brief side-eye toward the direction of her hand, says goodbye, and abruptly ends the video.

The hand gesture she used was created for domestic violence victims so that they can secretly ask for help if they are in danger during the coronavirus lockdown, according to Yahoo! News. It was created by the Canadian Women’s Association and is known as the “Signal For Help.”

“The social isolation measures necessitated by the COVID-19 pandemic are making it more difficult for those who are at risk of abuse or violence to safely reach out for help. ‘Signal for Help’ is a simple one-handed sign someone can use on a video call. It can help a person silently show they need help and want someone to check in with them in a safe way,” the group writes on its website.

The gesture went viral on TikTok in June.

Sayf’s video has been viewed over 19 million times. Viewers are worried she is in danger, leading to the creation of the “Rescue Om Sayf” hashtag.

While Sayf has yet to address the hand signal or fan concerns, she made an appearance on the BBC’s Arabic service to discuss her exit from YouTube. She reportedly said she was leaving due to “stress and personal issues.”

Sayf has been on the platform since 2017 and didn’t say if she will be returning.