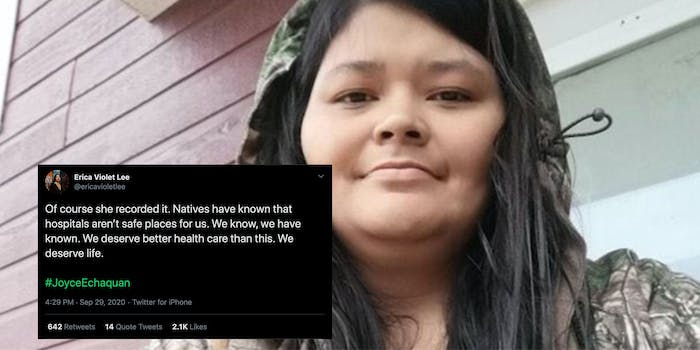 Woman live-streams nurses taunting her right before her death

In a disturbing Facebook Live captured Monday at a Quebec hospital, a woman recorded her last interactions with nursing staff shortly before her death. The 37-year-old Atikamekw woman and mother of seven, Joyce Echaquan, can be seen in the video suffering extreme discomfort while she calls for help, pleading for viewers to come get her, and is continually insulted by hospital staff in her final moments.

Echaquan enrolled in the Joliette hospital about 30 miles Northeast of Montreal for ongoing stomach pains, Vice reports. The hospital was a three-hour drive from her home community, the First Nations reserve in Manawan.

A CBC report provides that one of the nurses involved in the patient’s treatment has been effectively dismissed from the hospital, in addition to an administrative investigation and full coroner’s inquiry being launched, according to Integrated Health and Social Services of Quebec.

The originally posted video has now been hidden on Facebook, but remaining clips surfacing online show parts of the tragic incident as it unfolded. One clip shows the woman crying out for help as nurses make remarks about her in French.

According to translations provided by Huffington Post Canada, the nurses are heard telling Echaquan that she is “dumb as hell,” and “better off dead.” They continue to further insult the patient, saying she made “bad choices” in life, that she should “think about her kids,” and asking her if she is “finished fooling around?” One nurse also asks what the woman’s children would say if they saw her in that state.

Echaquan’s death was recorded live for viewers later that evening. A vigil was held for Echequan in front of the Joliette hospital Tuesday evening, in addition to several others.

The Premier of Quebec, François Legault, made statements Tuesday at a press conference related to COVID-19, saying the comments made by nurses and their handling of the situation was “not acceptable.”

“I really don’t think that we have this kind of way of dealing with First Nations people in our hospitals in Quebec. Yes, there is some racism in Quebec. We’re working on that,” he stated, after previously denying the existence of systemic racism in Quebec in June.

The event caused outrage among Canadians, re-emphasizing the need to address inequities and injustices on a systematic level in order to prevent similar occurrences in the future.

In a statement made Tuesday regarding the incident, the Cree Nation Government, Quebec’s administrative body of several Indigenous First Nations addressed Echaquan’s death.

“They are shameful, a stain on the institution that was supposed to offer Ms. Echaquan care and compassion and instead showed her the most degrading contempt and verbal abuse,” it wrote. “Let the death of #JoyceEchaquan not be in vain. Let it be the shock that ends the culture of impunity and establishes accountability throughout the public services in their dealings with Indigenous persons.”