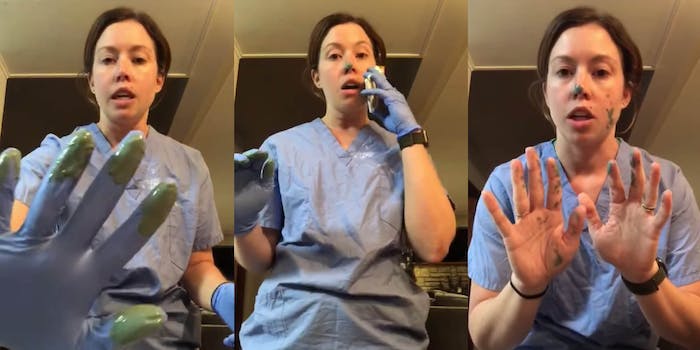 'I want to remind you of a little thing called cross-contamination.'

People everywhere have donned face masks, gloves, and sometimes full hazmat suits to prevent the spread of the coronavirus. Unfortunately, unless these measures are approached properly, they don’t do much good. In a viral video, a nurse breaks down how cross-contamination works—even when you’re wearing gloves.

Molly Lixey shared the video to her Facebook page, where it has collected 10,000 reactions and nearly 70,000 shares. A former emergency room nurse in Michigan, Lixey wanted to show people that they aren’t as protected as they might think. Using a grocery store as an example, she broke down how germs can be spread from items to your gloves and then onto you.

“I’m seeing a lot of people out in public wearing gloves right now,” Lixey says near the start of the video. “That’s great. If you want to wear gloves that’s all fine and well, you absolutely can, but I want to remind you of a little thing called cross contamination.”

Lixey begins her example with a person exiting their car at the grocery store. In her example, Meyers is the shopping destination of choice. Lixey’s fictional person dons her gloves before exiting the car and grabbing her cellphone—replaced by a piece of paper for this example—before heading into the store. “Now I’m in Meyer, and I’m getting my groceries,” she continues. Still wearing her gloves, she grabs some toilet paper—a rare commodity in these strange times—and places it in her cart.

This is where the video really gets into it. Lixey turns the hand she used to “grab” the toilet paper to face the camera, where viewers can see a layer of green paint coating her fingertips. “Now, if you can see, I have all these germs on my hands from my toilet paper,” she explains. “But it’s on my gloves, that’s fine right?”

“I’ve now touched my hands together a couple of times, and I reach for my phone.” Picking up her phone, Lixey mimes sending out a text to her husband. The green paint on her fingers soon coats the “phone” in dappled chunks. Over the course of her continued shopping, Lixey’s character grabs several more “contaminated” items and, in a moment of forgetfulness, itches her nose.

“Oh now my phone is ringing, it’s my mom,” Lixey explains before lifting the phone to her ear. When she pulls it away, green paint speckles her cheek and jaw. Repeatedly, she riffs on the false sense of security a pair of gloves can instill in people. By the time her grocery trip is over, the phone is almost completely covered in paint. Lixey’s character then heads to her car, where she opens the door before removing her gloves.

“I’m all done with these gloves, and I don’t want these dirty gloves in my car, right? So what should I do with my gloves? Oh, let’s see. You take them off appropriately,” she says, carefully removing the gloves without either un-covered hand touching the outside. “And they belong in the trash. In the trashcan, people. Instead of putting them in the parking lot next to your vehicle, please put them in the trash.”

Once in the car, Lixey says that you should be safe, right? You wore your gloves the entire time you were in the store, your groceries are already stowed, and you are on your way back to your clean, isolated home. “But, oh, your phone rings again,” she says before grabbing the now almost entirely green device. She briefly mimes sending off a text before dropping the phone and revealing her hands to the camera.

“Look. This is called cross contamination. There is no point in wearing gloves if you’re not going to wash your hands every time you touch something,” she says. “There’s no point, friends. So do whatever makes you feel safe, but remember there is some science here… Go ahead, wear your gloves, but you need to clean your hands all the time. Don’t touch your face. Don’t touch your dirty phone… Secondly, throw your gloves in the trash. They do not belong in the parking lot, on the ground.”

She concludes her video there. By the end, smears of green paint speckle her nose, cheek, and jawline, some of it concerningly close to her mouth. Her fingers and hands have smudges all over them.