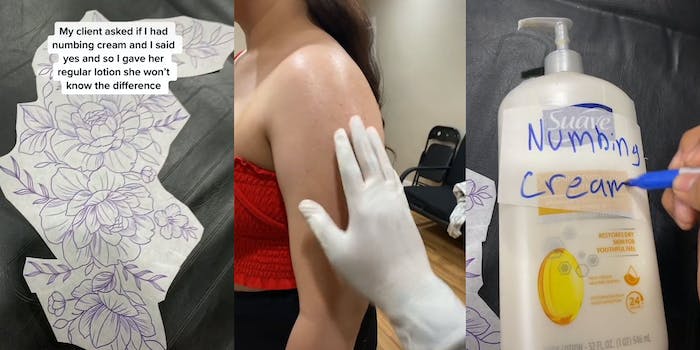 ‘Can we normalize being comfortable?’: Tattoo artist claims that when a client asked for numbing cream he applied lotion, sparking debate

'She won't know the difference.'

A Las Vegas tattoo artist has sparked debate on TikTok for refusing to use numbing cream on a client despite her asking him to. In the video, TikToker Medwin Maca (@Mmf_Tattoos) rubs regular lotion on the client’s arm before starting the tattoo session.

“My client asked if I had numbing cream and I said yes and so I gave her regular lotion,” he wrote in the overlay text. “She won’t know the difference.” The tattoo artist then grabs a regular bottle of Suave lotion and labels it “numbing cream” with a marker. He proceeds to slather the “numbing cream” on her arm.

Maca told the Daily Dot he used regular lotion on the client because he was out of numbing cream.  According to the artist, numbing cream does not really take away the pain. “It just takes off the sharp edges so she wouldn’t really notice,” he said via Instagram direct message.

The video has gone viral, garnering more than 400,000 views since it was posted on April 26. Several viewers debated in the comments section whether the artist’s actions were ethical, while others praised him.

Maca said he knew his client would be fine without the cream because he was convinced it was “just all in her head,” especially since it was her first time.  According to Maca, the client was very nervous and had mixed emotions from the moment she arrived at the session.

However, the client allegedly felt no pain during the session. When Maca revealed that he never used the cream, the client replied “that’s it? Wow, I was just overthinking it the whole time.”

“She was not mad at all but happy and laughed it off,” he told the Daily Dot.

Still, some viewers in the comment sections called Maca disrespectful and demanded that people not be judged for wanting numbing cream.

“I’ve never used it for mine but don’t think you should’ve lied? what was gained? Also, can we normalize being comfortable?” one viewer wrote.

Maca said the video was just a little joke he pulled with one of his clients and that it was not to be taken seriously. Especially since he believes numbing cream can be beneficial to some people with different pain tolerances.

“I do not want people to see this video and think that I lie to my clients or that I’m not honest,” he told the Daily Dot. “I have a beautiful relationship with every single one of my clients.”

Other commenters argued that pain was the entire point of getting a tattoo, with one viewer even comparing it to giving childbirth.

“Just like having a baby. Why am I gonna get the epidural when I can experience a one-in-a-lifetime pain pushing my baby out,” they wrote.