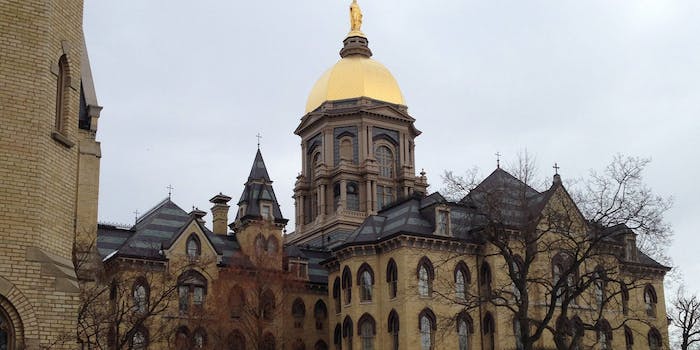 It's one of the first to take the administration up its anti-contraception-coverage offer.

For many students from low-income families, student health insurance plans are assurance they’ll receive adequate medical care during their college years. But now Notre Dame is taking the Trump administration up its offer to allow organizations and employers to drop birth control coverage from their insurance plans—a move that will impact students and employees.

First announced by Indiana Public Media, Notre Dame will end all health insurance coverage for students in mid-August 2018, just in time for the following school year. Meanwhile, the university’s employees will have their contraceptive coverage pulled as soon as Jan. 1. That includes graduate students employed by the university and eligible for health insurance.

Previously, in conjunction with laws under Obamacare, Notre Dame used a third-party service paid for by the government to provide contraceptives to the university’s students and employees. This meant the university wasn’t paying for its faculty, staff, and students’ birth control, but anyone covered under Notre Dame’s health insurance could access contraception on the federal government’s dime. However, last month, the Trump administration ended Obama’s contraception mandate and the Department of Health and Human Services announced employers could remove birth control coverage from their insurance plans if it would violate their religious beliefs or moral convictions.

Notre Dame, originally founded by a Catholic priest, is run by the Catholic Church. According to Vox, 90 percent of the school’s employees are on the university’s insurance plan, and 3,020 out of the school’s 12,393 students use it as well, most of which are grad students. In other words, most of the school needs health insurance to get by.

“I didn’t expect a change [in policy] so soon,” one graduate student named Amanda told the South Bend Tribune.

The ACLU has since sued the Trump administration over its religious freedom birth control policy, and one of the plaintiffs involved is a law student at Notre Dame. “No woman should ever be denied health care because her employer or university’s religious views are prioritized over her serious medical needs,” said law student Kate Rochat said in an official press statement.

By letting universities deny birth control coverage in their health insurance plans, critics argue the Trump administration is setting a dangerous precedent for medical coverage in the U.S. For one, it gives religious employers the right to arbitrarily discriminate against their employees’ medical needs. It also targets low-income families, forcing poor and working-class women to obtain birth control on the black market—or to go without birth control at all.