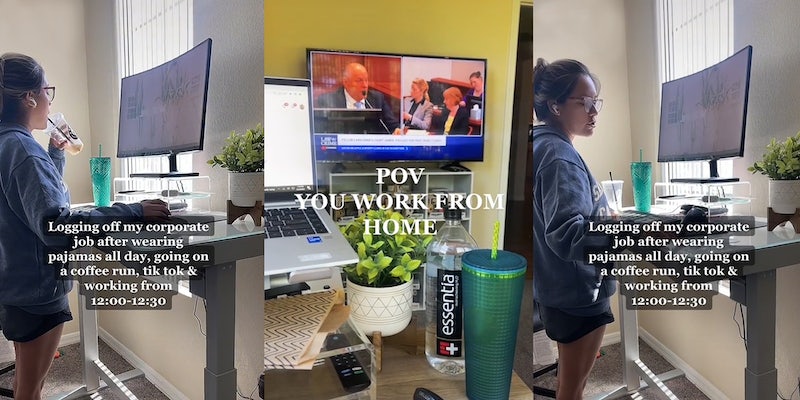 'That's why they're making us go back into the office.'

There are tons of studies extolling the numerous benefits businesses can enjoy from allowing employees to work from home. Since the onset of the COVID-19 pandemic, a bevy of remote work statistics has become available to research groups. Their findings strongly contradict what many “office life advocates” may have to say about work-from-home positions. Employees who perform their job duties outside the office are found to be more efficient with their time and ultimately more productive.

However, there are critics of remote working, which is understandable as not every industry or workplace culture can wholly benefit from this type of employment structure. Elon Musk mandated all Tesla employees return to work in-office or they can “pretend to work somewhere else,” if they didn’t have a valid reason for continuing work from home.

TikToks like the one posted by @katiarreyna, only helps to further the idea that remote workers are skirting their duties.

In the now-viral 5-second clip, the TikTok user can be seen at a standing desk in front of a monitor sipping a beverage through a straw. In a text overlay, she writes: “Logging off my corporate job wearing pajamas all day, going on a coffee run, tik tok & working from 12:00-12:30.” She lip syncs the following trending audio in her video: “Oh Lord, have mercy. Mm, mhmm, mhmm, today drained me.”

She hashtagged the phrases #corporatelife and #corporatetiktok along with #wfhhumor in her post. And though the combination of the added sound with her text overlay intones humor and sarcasm, the TikTok sparked a viral debate in the comments section among users.

Some folks commiserated with @katiereyyna’s post saying that they’ve had days like this, where they were still getting paid. Others chided the TikToker for essentially “outing” herself for all of the internet to see.

Microsoft’s official TikTok account caught wind of the post and commented, “one day at a time.” There were other users on the platform who remarked that they wish they had the luxury of working from home so they could take advantage of unproductive days like the one the creator said she was having.

“I need to get into a remote job because I miss these kind of days,” one user wrote.

“I feel like I’m the only one who’s working from home and working harder than I ever did in an office,” another commented.

“Lol I worked a full 8 hours at home today and I’m EXHAUSTED,” another said.

“I worked from 9-10am today. My status will be away the rest of the day,” one viewer wrote.

“And that’s why they’re making us go back into the office,” another commented.

“This is just a little joke :( I’ve never worked harder in my life lol WFH is no joke sometimes!” she wrote.

CNBC reported that some companies’ push to get employees back into the office extends beyond just concerns regarding dips in employee productivity. It’s also a means of satisfying the basic human need for folks to socialize with one another.

The outlet went on to quote statements from CEOs of massive companies like NBCUniversal’s Jeff Shell, and Tim Cook of Apple, along with President Joe Biden, who all penned letters about their excitement in getting co-workers back together again in person post-COVID.

Florence Healthcare’s Vice President of people and culture, Gia Ganesh, told CNBC: “The movement to bring people back to office settings may represent a fundamental human need for socialization.”

The Daily Dot has reached out to @katiereyyna via TikTok comment.