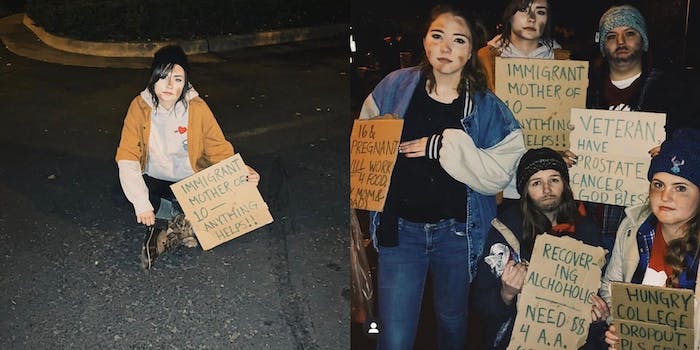 The Halloween costumes depict a homeless immigrant and a homeless veteran with prostate cancer.

Northern Arizona University students are receiving attention for all the wrong reasons this Halloween. They dressed up as various “types” of homeless individuals–and are continuing to defend their choice of costume.

Katie Stiff, 23, tweeted Instagram screenshots of the students in costume on Tuesday.

The screenshots show one student sitting on the ground with a sign that reads, “Immigrant Mother of 10 — Anything helps!!”–complete with brown marks smudged across her cheeks.

This girl dressed up as a struggling & homeless IMMIGRANT MOTHER for a HALLOWEEN COSTUME. And her friends went as various other homeless people. All the comments are people thinking this is so funny and clever. What the actual fuck, @NAU come get your students. pic.twitter.com/2u2G2ORyqY

In another photo, five students are seen with signs labeling themselves everything, from a veteran with prostate cancer and recovering alcoholic who needs money for Alcoholics Anonymous (AA) meetings to a 16-year-old who is pregnant.

Stiff who is based in Gilbert, Arizona, told the Daily Dot on Saturday that she knows the individuals in the photo, as her sister-in-law attends church with a few of them and is friends with them.

“The costumes were so disrespectful to people struggling in difficult situations, and made light of their plight,” Stiff said. “To ridicule and make a joke/costume out of someone’s struggles is so disgusting, and to not understand why that may be offensive is a great show of privilege and lack of regard for human suffering.”

Stiff’s post went viral and even reached others who attend class with the girls.

Gabriela Torres, from Flagstaff, Arizona, tweeted that she has a class–sociology of race and ethnicity–with one of the girls in the photo, identifying her as Paige Quaranta.

“I think it is disgusting that my peers would think that something like this would be funny,” Torres told the Daily Dot on Saturday. “Paige in particular because the class we are in together is Sociology of Race and Ethnicity and we discussed how costumes like this are harmful and just wrong.”

Some who commented on Stiff’s post are or have been a part of at least one of the groups the students tried to mock.

Left this in the bitch’s DMs pic.twitter.com/2wlbPlVFO1

Many commented on the inaccurate portrayal of immigrants asking for money or AA meetings requiring a fee (they don’t).

Every time I see a Hispanic in the streets they’re either selling fruit, flowers, jewelry, or they’re offering to more your lawn for some money. They never just ask for free stuff like most Americans I see on the street.

“Immigrant mothers” would never hold a sign like that . They hustle . Sell you flowers etc etc . JS

“The recent post by NAU students has been taken seriously. We involved the Dean of Students & Office of Inclusion. The students recognize the seriousness of their actions & apologized. @NAU values & supports free speech. Speech demeaning to others does not represent our values,” Cheng wrote.

The recent post by NAU students has been taken seriously. We involved the Dean of Students & Office of Inclusion. The students recognize the seriousness of their actions & apologized. @NAU values & supports free speech. Speech demeaning to others does not represent our values.

“According to information I just received, the girls and their families are under the impression that this statement was issued by NAU in order to condemn the BACKLASH the girl’s have received for their offensive costumes, INSTEAD of condemning the offensive costumes themselves,” she tweeted in response to Cheng.

According to information I just received, the girls and their families are under the impression that this statement was issued by NAU in order to condemn the BACKLASH the girl’s have received for their offensive costumes, INSTEAD of condemning the offensive costumes themselves.

Northern Arizona University did not respond to the Daily Dot’s request for comment.

According to screenshots provided by Stiff to the Daily Dot, the group ridiculed her after she politely offered to teach them why their costumes are so problematic.

“The girls and their families/friends responded with very rude comments after I tried to present why the costumes were controversial, going so far as to tell me to return to my ‘safe space’ and calling me a ‘dumb hoe,’” Stiff told the Daily Dot.

Stiff added that her sister-in-law also tried to help them, but was asked to “chill.”

According to the screenshots, Stiff questioned if the costumes were for a protest. Quaranta said that it was a “last-minute group” costume for a party.

“It did create lots of talk so could be,” Quaranta wrote, along with a shrug emoji.

When Stiff told them that they could message her to further discuss “how this could present as a lack of regard for human suffering,” they wrote back that her sense of humor was “suffering.”

Stiff said that some of the students’ parents have expressed anger over the backlash their children are receiving.

“No sense of remorse or understanding of why the costumes are offensive,” she said of the parents.

Many commented that such a tone-deaf message, intentional or not, reeks of white privilege–and Stiff agrees.

“It’s critical that white people check other white people when we see these acts of racism/prejudice/privilege, even if it’s unintentional,” she said. “It ultimately does not matter that it was unintentional. We must teach/grow/learn, and prevent these things from happening again.”

Doesn’t take time/effort, and it’s not clever or amusing. I’m convinced wypipo legit holding meetings to see who can be more outta pocket on Halloween.

“People die from poverty and racism every single day, these costumes perpetuated violence against groups of people that we need to step up and protect. White people need to do better, and it’s not the job of people of color to teach us how to not be racist and offensive,” Stiff added. “That’s a big reason why I decided to step up and initiate the conversation with the girls.”

The girls, Stiff said, have not taken her up on her offer.

Some of the girls’ Instagram accounts have since been made private.

The Daily Dot has reached out to Paige Quaranta’s mother.