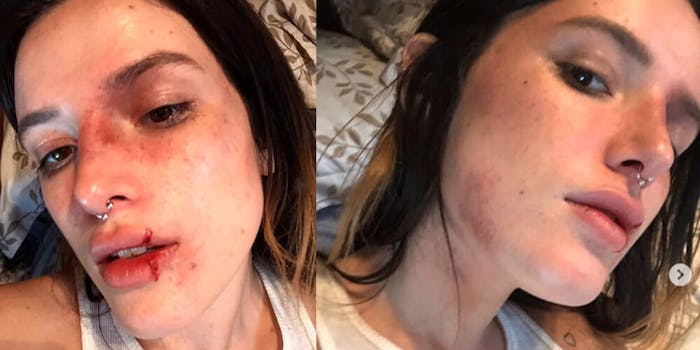 Some claim her bruised and bloody makeup is too reminiscent of domestic violence.

Bella Thorne left some fans confused and concerned after sharing a Halloween look on Instagram.

The actress/director shared a series of photos of her face looking bloody and bruised on Oct. 29, with the caption, “Hire me for your Halloween makeup I got u boo.” The very realistic makeup job gathered a number of compliments on her skills, but some fans weren’t as impressed.

“Why is glamorizing being physically abused culturally appropriate during Halloween?” one user asked.

Others associated the look with domestic violence.

“Do you think this is a joke? Making fun pretending to be a beaten woman? Really?” another questioned.

Fans were quick to point out that it was unlikely Thorne was purposely making light of domestic violence, as she herself has previously spoken out about her experiences with physical and sexual abuse and urged others to do the same.

Most fans who commented were just concerned that the bruising looked far too real.

“I immediately got angry that someone hit you,” singer and artist Nicholas Megalis wrote. “This is uhhh p fkn scary.”

Thorne has yet to comment on the criticism, but she did follow up with a less violent Halloween costume option: Sexy Girl Scout.