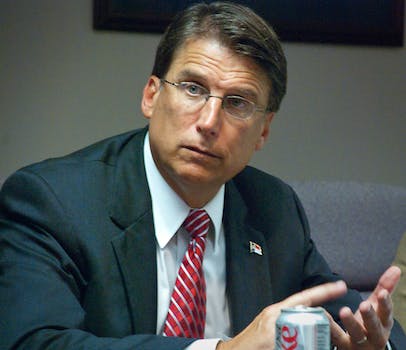 Democrats and Republicans couldn't agree over the terms to repeal.

The law, which went into effect in March, was a direct response to a Charlotte city ordinance that protected the rights of trans people to use the bathroom that aligned with their gender identity. On Monday, Charlotte rescinded the ordinance, which was overridden by HB2, in exchange for Wednesday’s special session to repeal the law.

But state lawmakers didn’t hold up their end of the bargain. HB2 was not repealed and is still law in North Carolina. This, despite the fact that Pat McCrory, the former governor responsible for the bill, lost re-election to Democrat Roy Cooper in part because of HB2. Cooper was vocally opposed to HB2 during his successful gubernatorial campaign.

HB2 requires that people in North Carolina use the bathroom that corresponds with their gender at birth because of a fabricated fuss that men will take advantage of the law to sexually assault women. There hasn’t been a single instance of this in any of the 12 states or 17 school districts in the country that have bathroom protections for trans people.

First and foremost, the unconstitutional law creates a dangerous environment for trans people in public spaces, strips them of their basic constitutional and human rights, and further perpetuates interests of Republicans over the safety of humans.

The bill also cost the state $400 million by September as the NCAA and Atlantic Coast Conference moved their championship events from the state. In an even bigger financial hit, the NBA moved its 2017 all-star game to New Orleans after issuing a statement decrying the law:

“Since March, when North Carolina enacted HB2 and the issue of legal protections for the LGBT community in Charlotte became prominent, the NBA and the Charlotte Hornets have been working diligently to foster constructive dialogue and try to effect positive change. We have been guided in these discussions by the long-standing core values of our league. These include not only diversity, inclusion, fairness and respect for others but also the willingness to listen and consider opposing points of view…while we recognize that the NBA cannot choose the law in every city, state, and country in which we do business, we do not believe we can successfully host our All-Star festivities in Charlotte in the climate created by HB2.”

According to CNN, the bill introduced to repeal HB2 was not adequate for Democrats, who are a minority in the North Carolina House and Senate, because it would also put an indefinite moratorium on local government from passing anti-discrimination ordinances. The legislators may discuss repealing the bill again in January during a regular session.