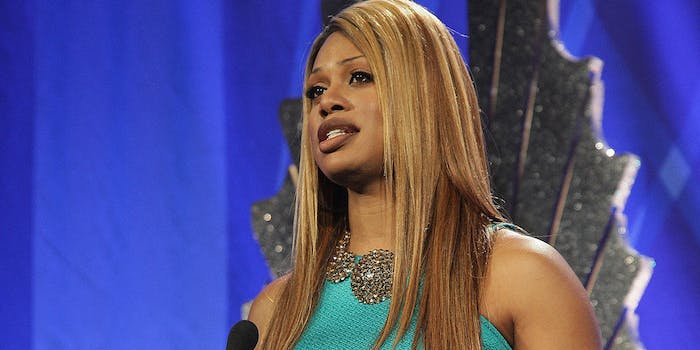 So she took to Twitter to air her opposition to the bill.

On Tuesday night, Donald Trump wasn’t the only person to sit down with Fox News’ Megyn Kelly. Orange Is the New Black actress Laverne Cox was also featured in an interview segment. But after the special failed to include her discussion with Kelly over North Carolina’s H.B. 2 “bathroom bill,” Cox took to Twitter to speak out against the missing footage.

Media Matters LGBT Program Director Erin Fitzgerald wrote in a post on its site that Fox’s censorship of Cox is just part of the station’s backward approach to trans rights.

Fox News has dedicated significant air time to the battle over bathroom access for transgender people and students, but chose to edit out Cox’s perspective on the subject. Fox chose to air a May 9 interview with Pat Buchanan about “bathroom bills,” during which he questioned why can’t “the minority griping about it simply deal with it?” Pundits have spent time on Fox denying the validity of trans identities or proffering that people chose to be trans, speculating on Caitlin Jenner’s genitals, and outright lying about the implications for guidance protecting trans students.

Fitzgerald also wrote in an earlier post on Media Matters that Kelly has a long history of anti-trans behavior, including criticizing the appearance of Michelle Kosilek, a transgender woman serving time in an all-male prison.

Kelly, who has worked hard to bring a breath of fresh air to the network’s conservative, white-male-dominated programming, has yet to respond.